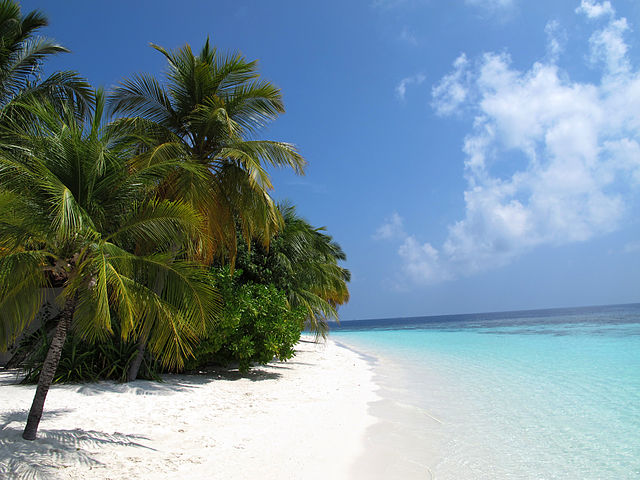 What to do in Maldives?

Wondering what to do when you are in the Maldives? Here is the guide to the top nine.

Holidayers from all over the world crave long for pampered nights in Maldives luxurious resorts scattered like pearls over the 1,102 islands that make up this wonderful archipelago. Your tropical wishes are sure to be granted on one of the 87 resort islands of the Maldives. The islands of the Maldives straddle the equator like over a total area of land 820 kilometers long and 120 miles wide. An unseen air of peacefulness enveloping the archipelago makes the Maldives the perfect place to discharge excessive stress caused by the fast paced world. The Maldives offers you an escape from the real world to a palm-fringed wonder.

The Maldives Islands seems to be protected by an abysmal blue sea. Lagoons are of shades of turquoise blue with great reefs, white soft sandy endless beaches, and luxurious fauna. With its paradisiacal picturesque sceneries, it is of no wonder holidayers can spend long days to just chill and relax.

Maldives is great when it comes to diving, snorkeling or just underwater exploration. Its protected coral reefs are home to thousands of species of fish.

It is a great spot for diving, snorkeling or just exploring the waters with thousands of different fish swimming around the corals.  The Maldives are always open to visitors.

Number nine of the top places is a historical place – Utheemu Ganduvaru. It is the place where the Sultan Mohamed Thankurufaan used to live. As it name suggests, the site is located in Utheemu which is an inhabited island in the north of the archipelago. The sultan is regarded by the population as one of the heroes of the Maldives. He earned a high esteem and respect from the Maldivians for saving them from the Portuguese conquerors.

The Mulee- Aage Palace is situated just in front of the Friday mosque (Hukuru Miskiiy). The palace was built in 1906. It was constructed by the sultan Mohamed Shamsuddeen III for his son before the First World War. The Sultan was however overthrown later in 1936 and the palace declared as a government property.

As the country became a republic in 1953, the palace became the President’s official residence. It is not still the case today as it is used as the president’s office where meetings are often held.

Also known as the old Friday mosque, Hukuru Miskiiy is the oldest mosque that can be found on the island of Maldives. The mosque’s interior displays a wonderful architecture with different varieties of Arabic calligraphy and patterns carved in its coral stone walls. The Islamic art inside it is simply wonderful. The mosque also houses some tombs have been erected for the memory of some saints. The calm and quiet place would be great for people to discover the Islamic culture the Maldivians follow.

The National Museum of Maldives is one of the best places to visit in the archipelago. It places number 7 out of the 10 top places to visit. Located at Male, the edifice houses a lot of diverse kinds of past objects that reflect the history of the country. The actual museum is a reconstruction of the old museum which was the royal palace. The new one has been constructed by the Chinese government and is where eventually the artifacts from the old museum would move to. It was declared as the official National Museum on July 26, 2010.

Let us go back to the amazing waters and reefs of the Maldives. Situated in the north of Malé, it is one of the most beautiful island of the Maldives. The island also house the international airport of the Maldives, Ibrahim Naser Airport. To reach hulhulé island from male, you can simply hire a ferry. Departure takes place every ten minutes. The ticket costs about 1$ which is very cheap. You can enjoy a ferry ride and the splendid beaches of Hulhulé. Place not to miss in the Maldives.

Also located at the North Male Atoll, is the Banana Reef, which is the most wanted diving site in the Maldives. As it names indicates, the reef is called Banana Reef because of its shape which extends 300 meters from north to south. The reef has one of the most flourishing fauna and flora. You can find Napoleon Wrasse, Moray Eels and the rare Bannerfish. There are countless amount of fishes of different colors and sizes. Banana reef has the reputation of being the best diving site in the whole Maldives.

Still talking about the best diving sites, at number 3 is Manta Point. Manta Point is a diving area where you can enjoy seeing a large numbers of manta rays being fed and cleaned by wrasses.  Nature is sometimes amazing. In fact, Manta point is a type of cleaning station for mantas just like they exist for cars and other vehicles. Manta rays circle several large coral rocks, and wait for their turn to be cleaned. After being cleaned, they swim gracefully to the reef feeding on shallow water full of plankton. Whether you are a novice or experienced diver, you will surely enjoy this unique and exciting diving experience.

The abundant marine life of the Maldives is a source of admiration and attraction for marine life enthusiast. Maldives is one of the best places to snorkel in the whole world. More than 70 species of coral and about 700 species of fish make the flourishing fauna and flora.

You probably have been to a huge amount of different places in the word known for their beautiful sunsets but none of them even come close to the wonderful sunset in the Maldives! It is a truly amazing sunset!

The amazing shade of orange and red create a real relaxation space.The colous are incredible Alone or with you partner, sit on the beach or in your bungalow balcony, grab a drink and enjoy it. You will surely have some great moments you will never forget!