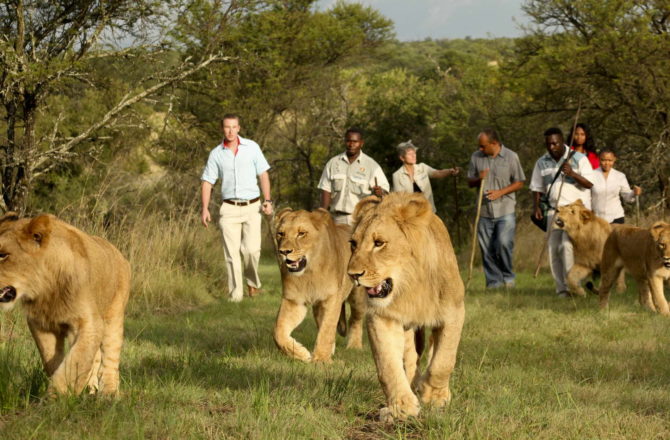 Walking with lions in Mauritius

A recreation center in the south-west of Mauritius offers the opportunity to interact and walk with real lions … thrills Guaranteed!

It is not other than the Casela World of adventures, once upon a time a bird park turned into one of the most famous attractions in the island.

Many people dream of approaching real felines, to feel like the animal tamer of the last circus they visited. The beauty of these animals, the unreal side of the situation, the desire to brave the ever-present danger, or simply the curiosity … So many reasons that can explain the will of these people to rub shoulders with the big cousins ​​of their little cat who purrs by the fireside …

Well, it’s possible! Many institutions around the world offer this type of activity rather unusual, such as the Wild Life Zaian Garden in New Zealand, or the Casela World of adventure Park in Mauritius.

The casela world of adventures

The Casela Park is home to 150 species of birds from 5 different continents, including pigeons that until recently were threatened with extinction. Pink pigeons can easily be distinguished from many other exotic species from Asia, Australia, Africa and America.

For the visitors comfort, the park offers facilities, such as an on-site restaurant, a kids’ club (games, slides, swings, etc.), snacks and souvenir shops. Collectively with other services, the park also offers additional activities where you can create a full-day or half-day excursion, depending on your preferences.

It’s a safe bet that almost all tourists who have stayed in Mauritius have heard of walking and interacting with lions. Indeed, this outing is offered in many flyers provided by tour operators and hotels on the island. Pamplemousses garden, Ile aux Cerfs or the town of Flic-en-Flac are also on the menu of the excursions proposed.

Relatively easy to access, except for the rather bumpy road, the Casela Nature & Leisure Park allows, besides walking with lions, quad biking, hiking, photo safaris, visiting a mini-farm or just to wander through nature …

A nice park to enjoy watching some endemic and exotic birds, many of which roams freely around the park.

But let’s go back to this walk with the king of animals. For the sum of 85 €, you will be entitled to a briefing and some small notions on these animals, before entering the reserve equipped with a wooden stick. The groups are not very big – no more than 10 people, which allows to really enjoy the presence of felines.

Walking with the lions: walk of the walks

After a few steps in the reserve accompanied by two guides and a specialized photographer, two other employees of the park arrive on the other side of a path, surrounded by two magnificent lions, although relatively small. One is a one-and-a-half male who weighs 150 kilograms, while the other is a small one-year-old lioness who is content with a hundred pounds. They walk peacefully between the guides, rub one another, until they pass right in front of the group of tourists, one or two meters away.

And the walk begins, the group follows the slow pace and measured felines, keeping in mind the few recommendations they received: do not squat to get to the height of the animals, do not look at them in the eyes, do not overtake them so as not to turn their backs on them …

During the walk, which lasts about an hour – depending on the behavior of the lions – guides provide a few stops to show visitors what lions can do. They throw pieces of meat ahead to make them run, they place high in a tree so that the lions go up or jump to catch them …

They also bring people in contact with felines, offering them to caress them, to hold them by the tail … So many magical moments! Before the end of the walk, the lions are invited to lie down at the foot of a tree so that tourists can succeed next to them for a photo shoot … Impressive to say that we have the face to 40-50cm of this jaw that would have no trouble crunching our bones!

Photos and souvenirs offered by the park

The photographer who accompanies the expedition takes a multitude of photos throughout the march, which are engraved on CD right away at the end of the trip. At the price of ten minutes of waiting and about 10 euros, it is possible to leave with the photos of this unforgettable expedition that few people will have the opportunity to live again … It is then memories full of the head and full cameras that the tourists are dispersed to resume the path of their respective hotels …

Other Actvitites at the park