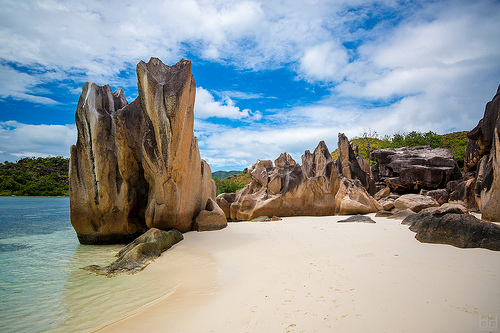 The Seychelles, a country comprised of 115 islands which lie to the northeast of Madagascar, has often been described as being the most beautiful country on earth.  The country is home to more than 90846 people called the Seychellois, the lowest population of any African state, and its total land area is of 455 square kilometers. The group of islands is thought to have been discovered by Maldivian and Arab sailors whereas the first European sighting of the islands occurred in 1502 when Vasco da Gama passed through the Amirantes. The island was claimed by Lazare Picault for France in 1756 under orders of  François Mahé de Labourdonnais. That is why the largest island of the country is called Mahé. The British eventually took over Seychelles in 1810 and the country gained its independence in 1976.   The Seychelles is formed of some 45 inner islands and other outer islands. The outer islands hold less than 2% of the country’s population on 12 islands while about 90% of the total Seychellois population lives on Mahé and 9% live on Praslin and La Digue.  The Capital of the country is the town of Victoria, in Mahé Island. The Seychelles is a perfect place for those who like the sea. In fact, most of the locals have to travel by boat between the islands. It is also possible for tourists to charter yachts and go island-hopping during their holidays in the Seychelles.

The soft-powdered white sand beaches, turquoise waters teeming with colorful tropical fishes, practically untouched vegetation and exotic animal species will no doubt make a lasting impression on travelers during their holidays in the Seychelles. There are many landmarks to see and activities to do for tourists in the Seychelles such as; hiking along the beaches from Beau Vallon to Anse Major in Mahé, visiting Vallée de Mai – a world heritage site, visiting Aldabra Atoll – the other world heritage site of the Seychelles famous for its giant tortoises, scuba diving, snorkeling, fishing, horseback riding, cycling excursions on La Digue and Praslin and of course island hopping on a chartered yacht or using ferries. Due to the beauty of its landscapes, its beaches and its lagoons, the Seychelles are of course a favorite destination among newlyweds and honeymooners. For those who haven’t tied the knot yet, it is also possible to get married in the Seychelles. Some tour operators and travel planners offer special wedding holiday packages and most hotels will allow weddings to take place on their premises.