For two centuries, the Port Louis theater has been a delight for Mauritians of all ages and communities. National heritage, this beautiful historic building is unfortunately waiting for hypothetical renovations since 2008 …

Located in the center of the capital

Elegant building located in the historic center of the Mauritian capital, the theater of Port Louis has been silent for eight years now, waiting for renovations that still do not happen despite the repeated promises of the authorities. This architectural treasure, nearly two centuries old, deserves much better than this sad fate, having hosted plays, operas, operettas, vaudevilles and many other shows for the delight of young and old since it opened in 1822. is indeed one of the first theaters built in the southern hemisphere.

The first British governor of the island, Sir Robert Farquhar, was responsible for the birth of this superb theater. He will bring a renowned French architect, Poujade, for its realization. Strangely, in spite of British rule, French plays were played exclusively for a long time; undoubtedly a means for Britain to reassure the population of settlers of French origin. The inaugural pieces were presented by a troupe of local amateurs. It was Henri IV’s hunting party, a comedy, and House for Sale, a comic opera.

The theater of Port Louis at the beginning of the 20th century. The photo is necessarily later in 1907, as evidenced by the statue of Governor Pope Hennessy erected this year. It has since been moved to La Place d’Armes and replaced by a lamppost.

At the center of the Mauritian Social life

In the following decades, the Port Louis Theater became the center of Mauritian social life. The beginning of winter coincided with the opening of the theatrical season, which continued until the beginning of the summer. The performances were almost always in front of a full room. The white, colored middle class composed most of the public, while the lodges were reserved for the richest or most important personages. The nocturnal performances were highly appreciated, so much so that arrangements were made by the authorities to bring all this beautiful people safely after the closing of the curtains.

European troops were invited to play all the great classics of theater and opera, but also of local authors, while magazines such as those of Marie Le Blanc were launched to announce the calendar of performances and review the plays played. This is how the theater has long been, with horse racing in the Champ de Mars, one of the favorite entertainment of Mauritians.

Throughout the 20th century, the Port Louis theater continued to ride this wave of popularity. Several great names in Mauritian literature have seen their pieces presented, whether they are staged operas, comedies or dramas. For example, Malcolm de Chazal (Judas), Max Moutia (The Land of Smiles), Dev Ramasawmy and Gerard Sullivan (Zozef ek so palto l’arc en ciel), Lucien Maugendre (Surcouf), Henry Favory (Anjalay; Tras) or Carl de Souza (The House That Went Offshore), to name but a few …

Local stars of the stage lived there also their greatest hours of glory, like Yves Forget, Cyril Ramdoo or Jocelyne Delaitre. More recently, more modern lyrical performances such as Starmania or The Children of a Dream were a great success under the splendid dome of this theater designed in the Italian way. The ceiling is indeed crowned with beautiful murals inspired by the great artists of the Renaissance. The sculpture work is also remarkable; art lovers could spend hours contemplating the smallest details and nooks of this ancient temple of Mauritian culture. 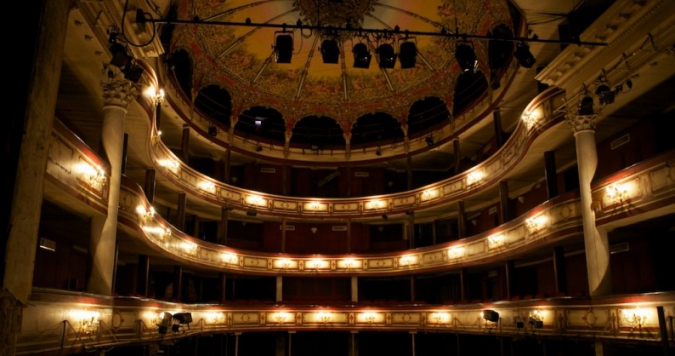 The pangs of time have, unfortunately, caused severe damage to the building. Renovated entirely in 1994 thanks to European funds, the theater is again and quickly falling into decay. Apart from a superb sound and light show on its facade at the Porlwi by Light festival in 2015, it has not been dream since 2008.

In a few years, the Port Louis theater will celebrate its bicentennial. Let’s hope that the long-awaited renovations can be completed by then …

Top photo: For 200 years, the facade of the Port Louis theater is a familiar and everyday vision for those who frequent