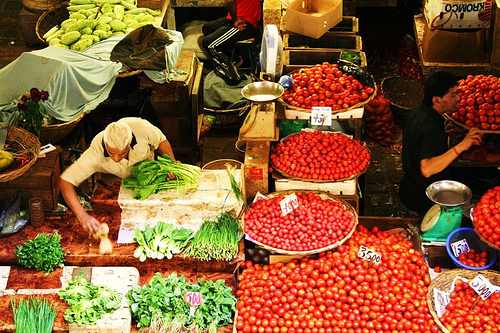 During holidays in Mauritius, most tourists would like to enjoy peaceful moments in beautiful places like the beach and stay away from the crowds and cities. But what about the other tourists who like to mingle with the locals and would like to get to know the more authentic side of Mauritius, even if it means leaving the peaceful Mauritian hotels or private luxury villas they were staying at and going into the most crowded places of the island? In this article we go on a tour of some of the most crowded places that you must absolutely visit during holidays in Mauritius.

The Champ-de-Mars racetrack is the oldest race track in the southern hemisphere and the second-oldest in the world. It was inaugurated in 1812, after the British took over the island, and it was planned as a way to gain the cooperation of the local French population. The racing season usually starts in late March and ends early December and at least 30000 people attend the races which are held mostly on Saturdays and sometimes on Sundays. Most tourists who have been there describe the atmosphere as being “electric”. Tourists would be better off staying away from the hysterical crowds and heading towards the lodge where, for a small fee, they will be able to enjoy the races in the shade and with an excellent view of the racetrack. The more adventurous tourists can head towards the centre of the racetrack where they will find bookmaker stalls and food sellers.

The Port-Louis Central Market is one of the places that actually define what Port-Louis is all about: the historical trading centre of Mauritius. It is a place where almost everything is sold: fruits, vegetables, fish, meat, handicrafts and even textiles. One of the stalls that is hard to miss is the one where traditional medicinal herbs are sold. Surprisingly, a rather nice clothing shop can be found up the escalators near the produce section. On the other side of the alley separating the buildings is a section devoted to handicrafts, although most of these are imported. Tourists should try authentic Mauritian street food sold there, such as dholl-puris, samosas, gateaux piments (chilli fritters), etc.

Avoid at all costs:

The streets of Port-Louis

Almost anything can be found on the streets of Port-Louis: fruits, vegetables, clothing, shoes, jewelry, toys, even underwear. Just like any place where everything is supposed to be found, the streets of Port-Louis can be jam-packed with people. Some street vendors have made it a habit of taking part of the walkways to present their wares and over time this has become a serious issue for the municipality. However, for people patient enough, browsing the streets can be a rewarding and even surreal experience. One of the best parts is discovering the different shops around the town: shops selling goods exclusively from India or China, others selling textile to the tailors and seamstresses of the island, etc. There are also a great number of commercial centres popping up all around town with shops selling more up-market goods. Those are also worth a visit as are the numerous restaurants selling a variety of delicious food.

Quatre-Bornes is a city located in the district of Plaines-Wilhems. It is mostly known for its commercial centres, restaurants and shops. Its most prized attraction among the locals is its market. While on Mondays, Tuesdays, Wednesdays, Fridays, and Saturdays the market is devoted to the trade of fruits and vegetables, on Thursday s and Sundays it becomes a really crowded area for the sale of textile products. Whether you’re looking to stock up on sundresses, jeans, shirts, tee-shirts or oriental clothes such as bright sarees , churidars or colored shalwar kameez, you’ll find what you’re looking for here. Expect to move slowly among tight-packed crowds: although the total surface area of the market is quite small, you could be stuck in this crowd for more than an hour! The experience is rewarding though, if you’re looking for things to buy. Just be careful at the customs of your own country as some goods might be considered counterfeit.

What not to miss:

The town of Rose-Hill is located between Quatre-Bornes and Port-Louis. It is a great place to go shopping as there are quite a variety of shops there and great restaurants too. Compared to the other cities, Rose-Hill does not have as many street vendors. The shops are rather up-market as well, with most having clearly indicated prices for their items.

What to look for: