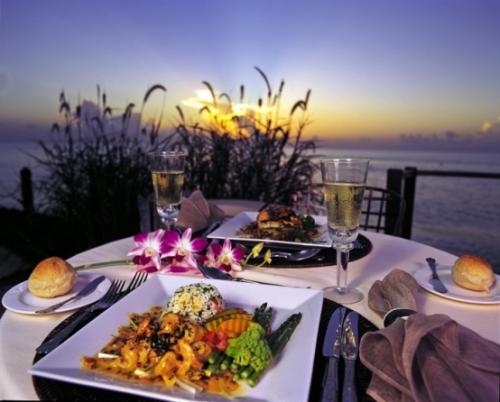 Seychellois Creole cuisine is simple but delicious. The dishes mainly comprise of fish and shellfish, rice and vegetables and finally, delicious exotic fruits. The food draws inspiration from the diversity of the origins of the Seychelles culture, French, African, Indian and Chinese …

In the eighteenth century, the first settlers landed in Seychelles. Their culinary tradition gradually incorporated tropical fruit and vegetables and warm seas fish into the dishes. At the same time, the slaves from the eastern shores of Africa, enriched the cuisine by eating roots like cassava, Taro and sweet potatoes … without forgetting fruits like banana. The proximity of Madagascar and Reunion (then Bourbon) promoted the use of leafy vegetables, vanilla and ginger, which are mixed with garlic, which became an integral part of the Seychellois cuisine.

At the time of the Intendant Pierre Poivre a garden of spices was created, which is now called “Jardin du Roi” at a place called Anse Royale. This garden is now rehabilitated and worth a visit. The Seychellois cuisine has been further enriched with the advent of Indian merchants. The masala curries and “pulaos” (kind of pilaf) are today listed in the directory of Creole cuisine. The Seychelles chutneys are also most probably inspired by the cuisine of India.

More recently, Chinese merchants and shopkeepers moved to Seychelles, bringing with them other flavors in addition to the oldest culinary traditions. Below is a traditional Seychellois dinner along with its recipe.

Have a feast guys!

Scrape ginger to remove skin and grate it.

Cut the peppers into small pieces.

Cook the crabs for about 5 minutes in boiling water. After cooking, remove the crab from the boiling water and allow to cool.

Cut them into four pieces.

Brown the pieces of crab in hot oil over medium heat. Add the water and bring to boil. Simmer a few minutes and skim the surface.

Strain the broth and put crabs aside.

Dip the crabs in this broth for 2 minutes.

This recipe for pork curry is a succulent Creole specialty which very easy to do and that will delight all gourmets. And when you’re passing on the island of Mahé in the Seychelles, do not miss to climb the steep path to the “Jardin du Roi” to taste the original version.

– 1 teaspoon of salt and half of pepper

– 1 half glass of boiling water

In a pan heat the oil and brown the onions.

Mix everything, but be careful to do all this on low heat or the taste of saffron and curry powder will be altered.

A quarters of meat already seasoned with salt and pepper.

Allow to simmer and reduce.

Add some boiling water back.

Cover it and allow to simmer for 15 minutes.

Reduce the heat, add the garlic and ginger.

Cover 15 to 20 minutes until the sauce has thickened, and especially to allow the meat and potatoes to cook.

Add salt and pepper to taste.

Here is a delicious Creole dessert that is as easy to do as the previous dishes and that will delight everyone – old and young alike.

Peel the bananas, cut them in half and again in length …

Bananas must be practically covered with coconut milk.

Adjust the heat to boil rapidly and allow to boil for 10 minutes at high heat.

After that, lower the heat and cook another 25 minutes or until the milk has reduced significantly.

Serve with a good tea!