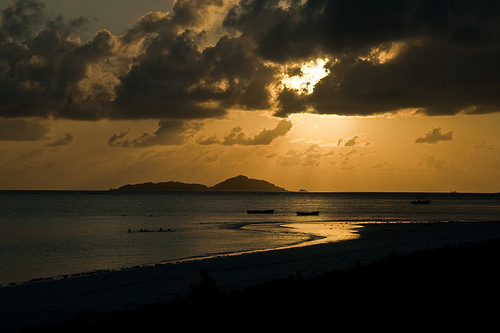 The Liberation Monument or Zonm Lib is situated on June Avenue in the town of Victoria, in Mahé.  It is a metal statue that represents a man lifting up his arms and breaking his chains. It was inaugurated in 1978 to commemorate freedom from colonial rule.  Every 5th of June, the Seychellois decorate the statue with flowers.

The Victoria Clock Tower, also known as Lorloz in the local language can be found in the centre of the capital. It was erected more than a hundred years ago to commemorate the death of Queen Victoria. Although the exterior of the clock tower has not changed in a century, its mechanism was replaced in 1999 by a quartz mechanism.

The Sainte Anne Marine National Park is at about 5 kilometers or 20 minutes by boat from the Island of Mahé. It is made up of six islands, Sainte Anne Island, Cerf Island, Ile Cachée, Round Island, Long Island and Moyenne Island. It is one of the most prized touristic locations of the Seychelles for scuba diving.

The Veuve Reserve can be found in La Digue. It is a nature reserve comprised mainly of thick jungle. It was named after the Paradise Flycatchers which the locals call Veuve.  Other animals that can also be found there are giant sea turtles and swiftlets.

Silhouette Island is the third biggest island of the Seychelles. 93% of its surface area is protected. It is also known for its mountains: Mont Dauhan (740m) , le Mont-Pot-à-Eau (621 m), Gratte-Fesse (515 m), le Mont Corgat (502 m), le Mont Cocos Marrons (500 m). Several endangered species can be found there, such as the Seychelles sheath-tailed bat, the Seychelles giant tortoise, Schefflera procumbens, among others. There is a legend that the famous corsair Jean-François Hodoul buried his treasure there.

The Seychelles Botanical Gardens can be found in Mahé and were established in 1901. There, you can find fruit trees, timber trees, spices, palms and ornamental trees as well as giant turtles. Various personalities have also planted trees there, such as The duke of Edinburg and Geoge Harrison of the Beatles.