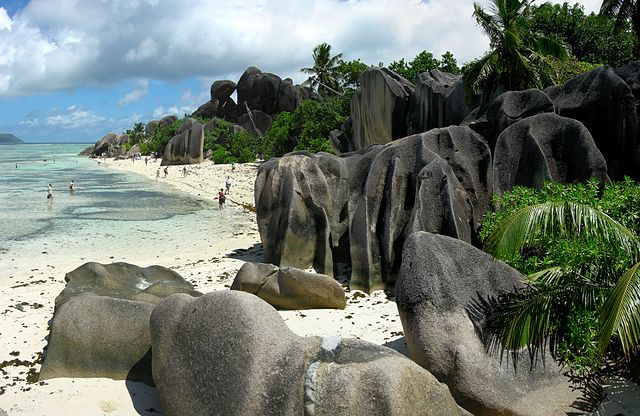 The Bicentennial Monument can be found in the capital of the Seychelles, Victoria, on Mahé Island. It is situated at the round-about at the junction of the 5th of June Avenue and the Avenue of the Liberation. It is locally known as “Moniman trwa lezel” which means “monument with three wings”. It was erected in 1978 to commemorate the 200th anniversary of the town of Victoria. It represents the African, European and Asian origins of the inhabitants of the Seychelles.

The Cemetery of Bel Air is the most ancient historic place of the Seychelles since it was the first place that settlers used to bury their dead. There, you will find the graves of several famous people who lived in the Seychelles such as the French Corsair Jean-François Hodoul, or Pierre-Louis Poiret who some people thought was the son of Louis XVI, among others.

The Domaine de Val des Près serves as an exhibition on Creole arts, architecture, crafts and gastronomy. Its centerpiece is the « Gran Kaz », a colonial house built in 1870. There, you will also find “La kaz Rosa” a worker’s house as well as 12 workshops for local crafts. At the “Vye Marmite” restaurant you will be able to get a taste of authentic Creole dishes. You will also be able to purchase local souvenirs from “La Maison de Coco”.

At Union estate in La Digue Island, you will be able to find a traditional coconut farm. Coconut oil and copra were once the main exports of the Seychelles. Nowadays Union Estate is run as a theme park where you will be able to ride horses or watch giant turtles and see how coconut oil was extracted.

The building known locally as “La Bastille” can be found at the North of Victoria. It was built in the 1930’s by Ange Pilleron. Nowadays it houses the National Heritage Section of the Ministry of Culture. It is surrounded by a garden of medicinal plants. Sometimes art exhibitions are held there.

The place called Mission Lodge was originally called Venn’s Town. It was a school for the children of freed African Slaves. A lot of endemic birds can be observed near the ruins of this little town. It is a very picturesque spot that offers a breathtaking view over the ocean.

The Seychelles National Archives can be found in Victoria, in Mahé. There, you will be able to see a collection of old photographs as well as archives going back to 1770. Guided tours are offered.

Photos courtesy of the Seychelles Tourism Board