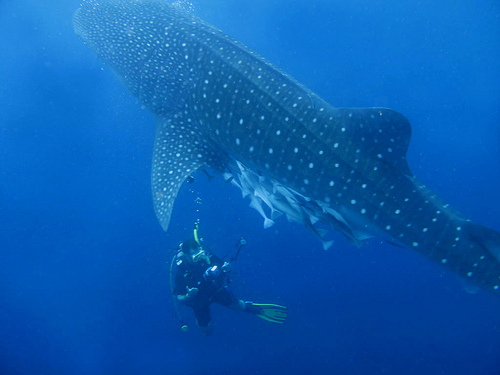 SCUBA diving in the Seychelles

One of the most prized sports that tourists can practice during their holidays in the Seychelles is scuba diving.  The ocean is always warm as the temperature always stays within 27° and 29°C.At the same time, this warmth attracts a lot of animal species and during your dives around the islands of the Seychelles you will be amazed by the number of fishes that you will see.

The Seychelles archipelago is made up of 115 islands, some of granitic formation, others being coral islands. The ocean floor will be well within a depth of 30 meters most of the time and the dive is guaranteed to be one of the most satisfactory dives for all scuba divers.  Schools of fish of different varieties will welcome divers after just a short swim in crystal-clear waters as well as multi-coloured corals.

Among the species that divers may see during their underwater adventures they will find: nurse sharks, flocks of sea urchins and starfish, parrot-fish, caranx, octopi, boxfish, barracudas, batfishes, scorpion fishes, sea turtles, among others. Maybe some divers might be lucky enough to be approached by one of the most mysterious and majestic fishes that still exist today: the whale shark, which is quite a gentle giant, despite being a shark. A close second will be the similarly majestic Manta rays.

During holidays in the Seychelles, some shipwrecks can be explored by more experienced teams of divers such as “the twin barges” which were deliberately sunk to create artificial reefs, “the Dredger wreck” which was also deliberately sunk, and the Ennerdale which was a 47000 ton tanker which struck an unmarked rock and sunk.

Finding scuba diving equipment in Seychelles is easy as well. Scuba diving has really become a sustainable touristic attraction there and there are many companies as well as diving centers where you will be able to rent equipment and take diving courses during your holidays in the Seychelles.