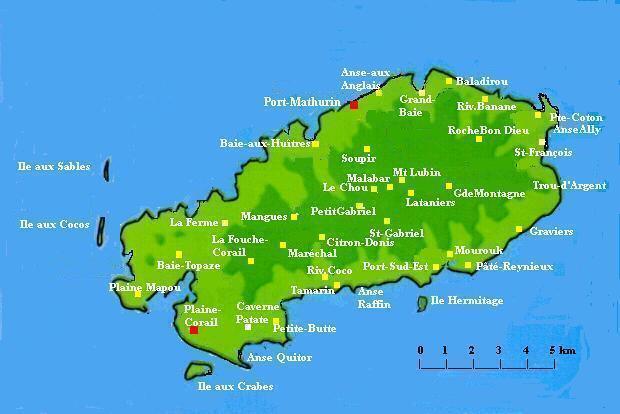 Rodrigues is a charming little holiday island located about five-sixty kilometers east of Mauritius in the middle of the Indian Ocean. Measuring only eighteen kilometers long and eight kilometers at its widest point, Rodrigues is entirely surrounded by coral reefs and azure lagoon which offers endless possibilities for diving and snorkeling.

Named after the Portuguese explorer Diego Rodrigues, Rodrigues is the smallest of the Mascarene Islands and is also a dependency of Mauritius.

Rodrigues is a place that is strikingly beautiful. The island is hilly and is surrounded by beaches and islets, such as Cocos Island. Its highest point is Mont Limon, which reaches 395 meters above sea level. The rest of the island is made of basaltic rock. On the coasts lie many coves, creeks and cliffs.

The landscapes vary from hilly lands to steep volcanic hills. The lagoon and coral reefs of Rodrigues are twice the size of the island and the islands abound with marine life.

The island is a melting pot of people from different cultures, religions and ethnicities. The people there live simply; hence explaining the fact that time seems to have stopped since ten or twenty years ago.

Its charm and relaxed pace of life and simplicity attract celebrities from around the world who come to enjoy the tranquility of the island and its natural beauty. Rodrigues is certainly one of the best places on earth to spend a peaceful and memorable stay. Those who love the beauty of nature will be fascinated by seeing the picturesque scenery of this quiet island.

The tropical vegetation of the region is extremely enchanting. In addition, the island offers the perfect settings for honeymoon couples and for families seeking tranquility.

This beautiful island is the result of volcanic activity that took place there about 4 million years.

Over time Rodrigues has developed a unique environment and is home to many endemic species: 42 species of trees; The Rodrigues rousette; The two species-birds Rodrigues foudie and Rodrigues Warbler; and on the reef coral species, two species of damselflies and many new species of crustaceans.

Other endemic animals such as giant tortoises and Solitaire are now extinct.

With its 38,000 inhabitants Rodrigues is very authentic. The special charm of the island is mainly calm and harmonious way of life of its inhabitants. Kindness and simplicity are the main features of Rodrigues.

Religions on the Island

The Catholic faith is predominant. The Catholic Church is deeply rooted in the Rodriguese society. The Anglican Church, the Adventist Church and the Assemblies of God are also present in Rodrigues.

There is also a small number of Hindus, Muslims and Buddhists. Religion, respect for tradition and family are the pillars of Rodriguese life. There is a very beautiful mosque in Port Mathurin and in the village of Creve-coeur, Hindus have a temple dedicated to Shiva.

English is the official language of the island, even if it’s Creole and French that are the most widely spoken.

The climate is pleasant in Rodrigues; generally warmer and drier than Mauritius. Rodrigues is subject to regular winds blowing from the southeast. Rainfall is fairly low. Seasonal temperatures are variable. Being subject to a tropical climate, there are only two seasons:

From November to April with an average temperature of 24-34 ° C during the day.

From May to October with an average temperature of 16-27 ° C during the day.

Most festivals and celebrations in Rodrigues are the same as those celebrated in Mauritius. The major festivals are Diwali, Holi, Chinese New Year, Christmas, Easter and Eid.

In the 10th century, Arabs visited the Mascarene Islands. A map of the 12th century by the Arab geographer Ash-Sharif al-Idrisi, clears Rodrigues. The island was named after the Portuguese navigator Diego Rodrigues Dom in 1528.

During the 18th century, several attempts were made by the French to develop the island. African slaves (ancestors of the present population) were brought to Rodrigues to develop animal husbandry and agriculture. In 1809, after a brief battle with the French, British troops took possession of Rodrigues. With the British occupation, slavery was abolished.

This small island, emerging from the lagoon is a beautiful nature reserve and became one of the main attractions of Rodrigues. The island is covered with coconut palms, casuarinas and boasts a long sandy beach.

The water is shallow in the lagoon surrounding Cocos Island and in some places it is possible to see corals and rocks above the water surface. This is the reason why the boat trip to Cocos Island is an adventure in itself, and in addition to the boat ride you will have the pleasure of admiring marine life from the boat.

On Cocos Island, you can see thousands of birds. A small path through the center of the island allows us to discover the different species of birds. The best time to see most birds is during the summer.

To visit the Cocos island, it is necessary to obtain proper permission. This authorization is generally obtained by tour operators as part of organized tours. Part of the Cocos Island cannot be visited and is closed to the public.

Have a nice trip to Rodrigues!