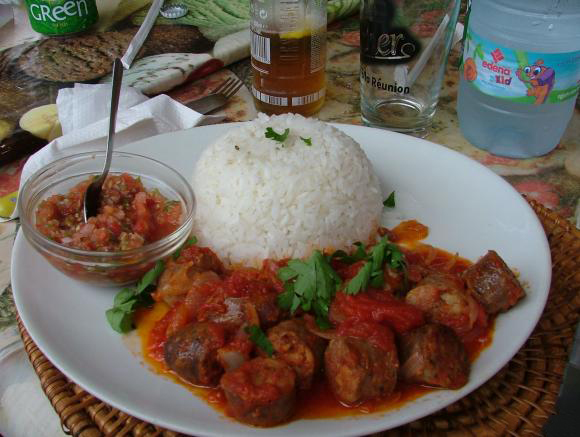 Reunion has a lot to in terms of culinary styles and tastes. The island offers a range of exotic recipes that is a pure bliss to the taste buds of any traveler at heart. The plethora of nationalities has contributed to the combination of cuisines from India, China, France, Madagascar and the African mainland making the local food, interesting and exotic but not too spicy or bizarre.

Actually it is difficult to find any dish tasting like it did – French and other influences have enhanced and enriched their original recipes. Eating is one of the favourite activities of the Réunionese and mealtimes are family occasions.

The regional specialty is ‘carri’, a truly Creole dish in which many ingredients are together simmered to perfection. On Réunion, the cari is made using Indian spices and local ingredients like meat, poultry, fish or seafood and contains garlic, onion, plenty of tomatoes, turmeric, cloves and ginger. Carris are best eaten with boiled rice which helps appease the fieriness of the carri.

The favourite special dishes of the islanders are carri bichique, carri tangue (hedgehog) and wasp larvae served in a dish called rougail. The most popular dishes in Reunion are: peppers candy; small raised donuts to enjoy an aperitif, the inevitable rougaille sausage, many curries of meat, fish and shellfish and sweet potatoes cakes. You will also come across traditional Indian, Chinese and French food in hotels and restaurants on the island that also serve good local and French wines.

Typically, the Réunionese menu consists of rice, maize (rarely), pulses, leafy vegetables, curry or rougailles. They are copiously accompanied by pickles, salads or chilli (Chatini). More specific dishes that were, then, reserved for a more intimate family use, now forms part of eating habits. Gradually, many crossbreeding have emerged such as Massalés, Brianis and many Chinese dishes such as Chop Suey, Noodles, Fried Rice, Sweet and Sour dishes and soups.

The use of local products is promoted by applying the basics of French cuisine to diversify this tasteful Réunionese cuisine. Tubers such as sweet potato, cassava, breadfruit and others have formed the principal ingredient for meals during hard times. They retain, at present, a connotation of poverty. They are mostly used today in donuts or for making cakes or sweet dishes.

The Must-Taste in Reunion

Rice is the food par excellence and is prepared in different ways:

White rice: The rice is boiled in water until complete evaporation. It appears like a dry preparation of grains.

Corn rice: a mixture of equal amounts or in different proportions of the two condiments- corn and rice. It is cooked in the same way as white rice and often accompanies meat/fish dishes in a massala sauce.

Yellow rice: The same way white rice is prepared but turmeric, thyme, salt, pepper, oil and sometimes lards are added to the preparation. It is sometimes called “PLO”.

Cantonese rice: it is a mixture of cooked rice, vegetables, meat, egg, shrimp and green onions, seasoned with Nuoc-man or Soy sauce.

They are served as an auxiliary to rice and curry at noon. They are a mixture of finely chopped onions, garlic, ginger and crushed green chillies. Sometimes crushed tomatoes or leafy vegetables are incorporated to the mixture and cooked in spices. They must remain green, without sauce, and crispy.

In difficult times, rice and maize were absent and replaced by roots and tubers like cassava, sweet potato, and taro. These commodities were just boiled in salt water and pepper, when they were available and were often accompanied by chili or rougaille and sometimes meat.

Rougaille is often eaten as a main course. The preparation mainly includes charcuterie (sausages, smoked, sausages), dried or smoked fish (cod, herring, snouk) cooked in a sauce made of chopped and browned onions and chopped tomatoes and chilli.

These dishes may contain crunchy vegetables, such as the flower stalks of onions, which are added at the end of the cooking. Sausage rougaille is the most common and popular dish of Reunion and conquered the taste buds of many.

Usually gratins are prepared with vegetables like chayote, pumpkin, green papaya and pasta. The vegetables are cooked with garlic, thyme, salt and pepper, and then mixed with Dutch cheese or béchamel and Emmental.

The donuts are mostly used as snacks. The most popular are the eggplant donuts, stuffed peppers and fried shrimp. Potato or breadfruit are boiled in salted water and mashed. This well-dried mash is mixed with herbs (green onions, parsley), pepper and ginger sometimes. The mixture is then made into balls and lightly floured, after which it is fried. Various other appetizers of Indian and Chinese origin can be tasted such as samoussas, catlesse, wantan and chicken nuggets.

Litchis and festivities go hand in hand! The little red fruit with its milky flesh ripens with the coming of Christmas time. Towards the end of the litchi season the longan fruit takes the relay in February.

Mangos ripen earlier, and are often a result of learned breeding. In abundance, there are some fifty varieties of mango in Reunion. There is the long and reddish “early gold”, the “José”, and the “Auguste” which are all succulent. They may be eaten while still green, cut in thin strips, and seasoned with a mix of salt and chilli peppers.

The small Victoria pineapple is sweet and tasty, and it eaten all year round. Goyaviers, also known as strawberry guava, are an upshot of an invasive imported plant; they are little red acidic fruits. As soon as the month of May comes along they are gathered in the hills of the island on the footpaths.

Plenty of other fruits, whether eaten as such or in sorbets, are appreciated: bananas, guava, passion fruit, pitaya cactus and even peaches, which grow in the Salazie circus.

The most delicious small cakes you will come across are the cassava and coconut candy. You will also have the chance to taste the very original jams of the island not to mention the candied with which you will fall in love, again!

The tropics are not the first place you’d seek out a good wine, but Réunion has developed a thriving little wine industry since vines were first brought to the island in 1771 by French Colonials.

Since 1996, a cooperative has been operating a high-quality wine-making facility, growing the noble grapes – Chenin, Gros Manseng, Malbec, Pinot noir, Syrah – that thrive in this climate.

Réunionese Cuisine- Taste it for yourself! You’ll be surprised.