Reunion Island’s Gastronomy is the result the influences and mixture of Malagasy cuisine, French cuisine, Indian cuisine, African cuisine and Chinese cuisine brought on the island by successive immigrants. It is naturally spicy and relatively invigorating.

Reunion cuisine, more than bicentennial, is the ancestor of fusion cuisine that New Yorkers are proud to have discovered in the 1970s.

When it comes to food, there is nothing more important to the “Réunionnais” than good food to titillate their taste buds. As its population is a mixture of ethnicities borrowed from three continents, the cuisine of the island has a number of dishes combining elements taken from different parts of the world. Reunion has a wide range of culinary traditions.

The traditional dish is curry, a little ritual is that the rice is placed at the bottom of the plate, the grains are added on top and lastly the curry. Chutneys and relishes are them served in a separate dish. We can observe the same pattern in the Island of Mauritius probably due to the fact of having common ancestors.

The role of Appetizers

Appetizers play an important role in Reunion Cuisine as part of the meal. It is not only an opportunity to absorb a little bit of punch or rum, but it also opens the appetite to try several snacks. The most traditional are the samosas or “bonbons piments”, “bouchons” and “piments farcis”.

Always accompanied by rice, the most common dishes are the “carris”, the local version of the Indian curry, “rougail” and stews. The Carri consists of a base of onion, garlic, and spices such as turmeric on which fried fish, meat, eggs and which is then added to tomato sauce. Dishes can also optionally be flavored with ginger and zest of kaffir lime is generally appreciated. Chop suey and other Asian dishes such as pork with pineapple are also very common.

Dishes are usually accompanied by pulses. Reunion Island is famous for the best lentils in the world, namely the lentils of the Cilaos.

The traditional way of preserving meat is the “boucanage” and the cooking is done in cast iron pots. Traditionally, the main course was also prepared in the courtyard in the campfire or in a small outbuilding out of the house called the “cuisine”. They were then consumed on a banana leaf and often eaten with hands.

In Reunion, the custom is to eat rice for the three meals of the day. Rice is often cooked in the morning. The same rice is then reheated for further use during the day.

Even though, there has been an evolution in the culture of Reunion Island, it is still the case in the majority of households.

Other foods, which is designated by the terms of “carris” and “rougails” accompany rice to enhance the taste. The variety, quantity and quality of these vary according to the habit of families: meat, poultry, fish, vegetables, dried beans (red or white beans, lima beans, small fresh peas, split peas, lentils Cilaos, “ambrevates”, embériques), tamarind, leafy vegetables, and pickles.

It supports a variety of meat and fish with rougails because they allow to meet these dishes in an extraordinary way. Please note these accompanying recipes are to be dosed with caution.

The most famous “rougail” of Reunion Island is without contest “rougail saussice”, made with sausage and tomatoes cooked with spices and green chili. It is preferably accompanied by white rice or Zembrocal: rice cooked with turmeric and in which are incorporated red beans or lima beans.

Apart from the “rougails”, masala is also very famous on the island. One can also opt for a masala of goat or chicken.

Pickles are a vegetable based condiments made up of carrot, cabbage, green beans, palm kernel oil, cauliflower, green mangoes, and cucumber. In Reunion, pickles are preserved in an oil sauce and saffron flavored vinegar, crushed garlic, onions, ginger and chilies (z’enchar piment).

Leafy greens such as nightshade, Parietaria, Chinese cabbage and, watercress play an important part in the reunionnais cuisine. They’re often cooked as a broth served directly on rice. The most popular broths are made from the leaves of pumpkin or that of chayote.

Reunion cuisine uses it in his own way, to enhance the flavor of foods. The most widely used spices are pepper, cinnamon, cloves, nutmeg, cardamom, coriander, fenugreek, cumin, kaffir lime, ginger, turmeric, and saffron. It is clear that to meet the taste of the food, they make abundant use of red pepper, dried or green: the latter being the one that brings the most vitamins. It is not uncommon that this type of cuisine can burn the mouth of one who is not notified.

It existed and still exists some community disparities, even if all the Reunionnais share a common lifestyle and culinary techniques. The eating culture varies according to the communities.  Of course, Muslims do not eat pork and the famous “rougail saussice”, but other differences are observed. For example, the “zoreys” consume little pickle or curry spice, unlike the

“Malbar”. The “Zarabes” have a culinary culture closer to that of Mauritius than Reunion island.

The most common dish during festivals is the “paté créole”, a pie stuffed with pork curry called “godivo”. The crust of the pie is made by mixing flour with lard and turmeric.

The most commonly served desserts are seasonal fruit: mango (many varieties equally succulent), pineapples, litchi and longan in summer, guavas in winter (cool season between May and September).

The rest of the treats you may enjoy eating at any time in small amounts include the “bonbon la rouroute”, “bonbon cravat” or “bonbon miel”, the latter two being fried. 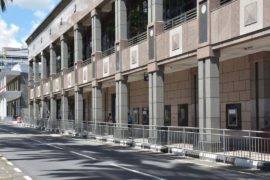