Mauritius, one of the pearl of the Indian Ocean, is marvelous at night. Warm, starlit evenings provide an idyllic setting for al fresco dining, dancing and romantic strolls on the beach. Contemplating a magnificent full moon brightly shining while admiring the glistening and enthralling dark lagoons- perfect for a midnight bath- will simply makes your holidays on the island more than perfect.

Whether you are lodging in a hotel or villa or just hanging around at some parent’s place, you should not miss whatever Mauritius has to offer to you.

As dusk replaces daylight, a lively atmosphere engulfs the island – especially on the north and west coast, where many nightclubs, pubs and restaurants can be found. Still those seeking a peaceful night will be satisfied too. The island proposes various activities, for various tastes, so as to please everyone.

You should definitely not miss a sunset in Mauritius. You will usually witness the best around Flic-en-Flac. To make sure you don’t miss the sunset, you can enjoy a day at the beach until the grand moment arrives. In summer you will witness sunset at around 19h00 and in winter at around 17h45 Do not forget your camera; it will surely be one of your best shots.

The facet of Port-Louis completely changes by night. The lively colours of the Caudan Waterfront will surprise more than one. Of the entire island, one of the most living places the night, is of course the Caudan. If you feel like it, you can spend some time at the casino and who knows you might win a fortune!

Going deeper into Port-Louis, you can visit the Jummah Mosque which is simply stunning at night. It is the biggest mosque without minaret of the world and is a very beautiful building. During certain period of the year, you can also visit China Town where traditional food is prepared and sold on the spot and where you will be able to admire traditional dances and fireworks.

To end the trip around Port-Louis beautifully, an escapade to La Citadelle is required. On one of the highest peak of the town, you will have the opportunity to witness a breath-taking view of the illuminated city from top.

A big advantage of the nightlife in Mauritius is that most of the clubs offers free entrance, while others charge a very low entrance fee of 100Rs (about 3.5 Dollars), which make it ideal for club hopping, where you enjoy some time in different clubs while never running out of money until ending the night at early morning the next day.

Since the entrance fee is not consequent, you will only have to pay is for the drinks. Drinks prices vary from club to club, but in general beers can cost around 90-120 Rs (3-4 Dollars) and a cocktail about 200-350 Rs (7-10 Dollars)

Flic en Flac is a very lively village where night life is present almost everyday. Events are usually planned on the beach and most of the time the parties are well organized: Whilst at other times they are just some spontaneous bond fires with some ‘ravanes’ and joyous sega typique all around.Famous nightclubs, known by all the revelers and night owls, border the sandy beach of Flic-en-Flac on the West coast of Mauritius making it one of the perfect spot to enjoy clubbing.

Grand Bay nightlife has evolved significantly during the recent years. From a city housing 1-2 clubs, today one will come across about 10 night clubs and many more active pubs. It is very easy to find clubs in Grand Bay, as almost all of them can be found on the main road in the center of Grand Bay. So you just have to start walking along the road until you see a club.

The weekends are usually full of activities. Every club organizes something special and you will surely find something fitting your personality. You just have to wander around Grand Bay and just sneak into every club until you find the perfect one suiting your needs. 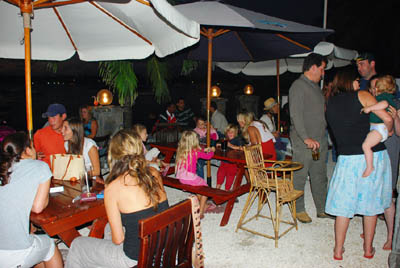 Some Tips While Clubbing in Mauritius

Some other clubs around the island:

If you are not one of those who love clubbing, you can still enjoy a nice evening in your hotel or in a restaurant where live shows are usually organised. You will have the chance to enjoy some good sega music and some beautiful ladies dancing in their colourful dresses. Mauritius is just the perfect holiday destination.