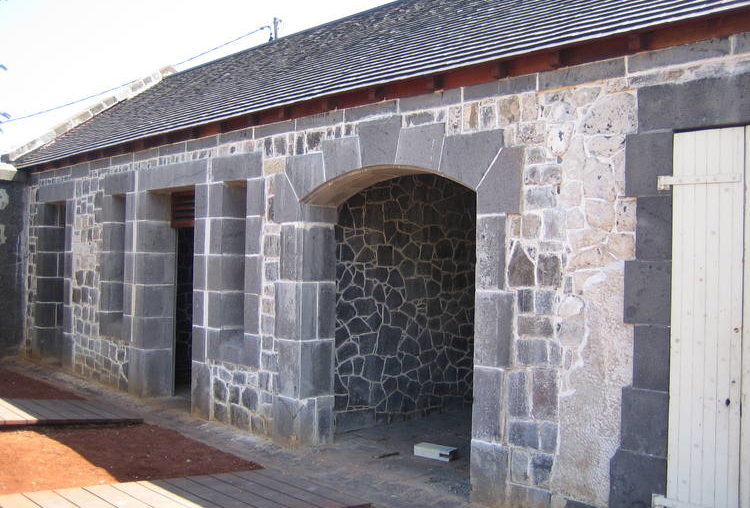 Museums are places of conservation and transmission of human, geological, scientific, technical and industrial history… All major cities or capitals have their own and Port Louis is not left out. The capital has even five, two managed by the State, two private and one by the post office. All very unique, they each bring a contribution to better understand Mauritius through fabulous time travel.

Let’s start with the most famous and oldest museum in Port Louis and Mauritius. It is known as the Natural History Museum, Port Louis Museum or Mauritius Institute. It is actually located on the ground floor of the Mauritius Institute Building, between the Government Hotel and the Garden of the Company. Formerly, it was also called “Desjardins Museum” in memory of Julien Desjardins, a Mauritian naturalist whose collections were ceded to the museum in 1840, date of its creation. However, it did not open until two years later. 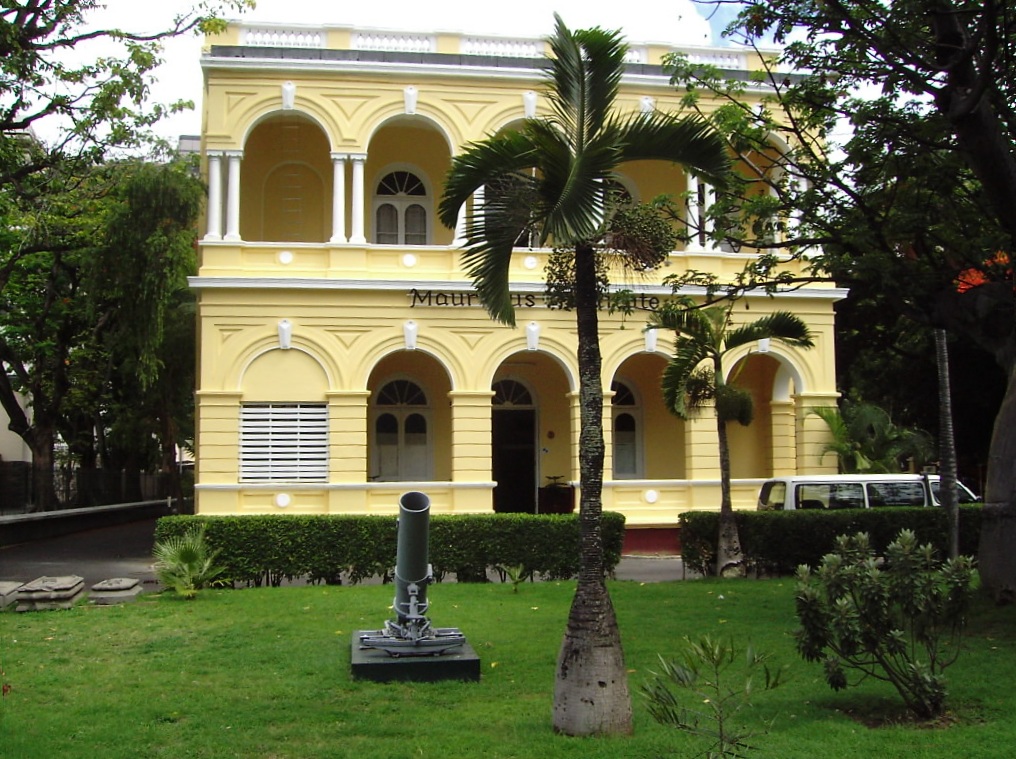 The building, designed by the British architect Mann between 1880 and 1884, is a replica of the central part of the National Museum of Colombo, Sri Lanka. The museum is divided into three thematic rooms and can be visited as a journey in the footsteps of explorers and successive occupations of the island and at the crossroads of civilizations of Europe, Africa and Asia. You can admire an impressive collection of birds from Mauritius and elsewhere, native and endemic. The most famous being the Rodrigues solitaire, an emblematic bird of Rodrigues Island and the dodo, the heraldic animal of Mauritius, symbol of the depredation of man. 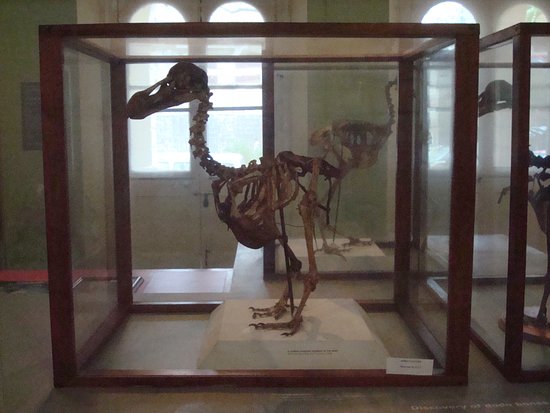 The museum is proud to have the most beautiful and authentic reconstruction of the dodo whose skeleton was discovered near the mountain of Pouce by a hairdresser from Port-Louis, Louis Etienne Thirioux in 1904. In 2012, a new collection came enrich the museum after the discovery at Mare aux Songes, bones of the Dodo. The museum also houses collections of fish and other marine life, geological specimens, works of art, and research materials.

We regret to note that this museum is not highlighted as it should have been. Indeed, old rooms would require to be completely renovated. Let’s hope that this will be part of the next projects of the government because many tourists make the trip to come and admire our emblematic Dodo.

If you go back to the municipality, you will arrive at the rue du Vieux Conseil, in front of the Theater. At the end of this paved alley, in an old 18th century warehouse belonging to the Municipality of Port Louis, is the Museum of Photography. 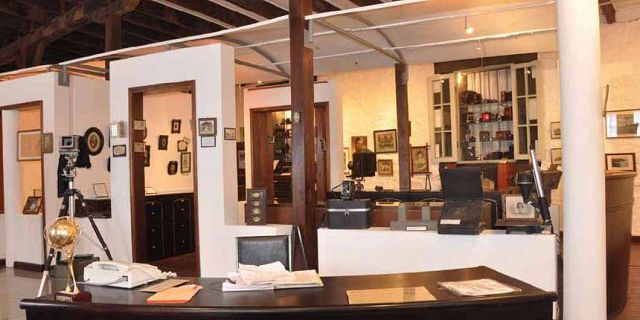 Created in 1966, it is the culmination of a man with a passion for photography, Tristan Bréville and his wife Marie-Noëlle. They display their fabulous collections accumulated for decades after laborious research around the island. An impressive collection of old photos, daguerreotypes and autochromes, vintage photographic equipment, beautiful postcards and old movies about Mauritius.

The museum contains some rare items – like this lens manufactured by Charles Chevalier for Jacques Daguerre in 1839. We also learn that one of the first buyers of a camera in the same week when the devices were on sale at Paris in 1839 was a Mauritian: Ferdinand Wörhnitz. Today, it is the couple’s children, Julie and Frédéric, who took over with the hope of carrying their parents’ dreams even further, to make this place the National Archives of Photography.

Note that near the museum is a building that once housed the Superior Council of the Isle of France and an old house, called House of the Poet, where Baudelaire, it is said, resided. For other museums, go down to the port. The most richly endowed and dynamic is the Blue Penny Museum located in Caudan. Inaugurated in 2001, it contains coins collected and kept by the Mauritius Commercial Bank, the oldest banking institution on the island, created in 1938. The museum is divided into two sections. The tour begins on the first floor in a room that dates back to the first navigations in the Indian Ocean. It’s a voyage into the “Age of Discovery” through the adventures of the first Arab, Portuguese, Chinese, Dutch, French and British sailors in search of lands full of riches. Witnesses of these feats, models of boats, charts and nautical instruments of different times and origins.

We then go to another important section of the museum where engravings paintings and other objects tell the main stages of the occupation of the island by the Dutch first and then the French and finally the conquest of the island of France by the British in 1810. The next stop is a stopover in the Port Louis of the 19th and 20th century through lithographs, engravings and watercolors. It is a city in full development that we find in the port, shops in the city center but also walks in quieter areas. The assembly of this exhibition is interesting since it offers contemporary comparative images to locate the places and to bathe in a romantic nostalgia.

Finally, we arrive in the holy grail of philatelists where after an enlightening reminder of the history of Mauritian postal services, a narrow corridor leads to two of the most famous postage stamps in the world, the red-orange penny and two pence indigo blue “Post Office”, published in Port Louis in 1847. For reasons of preservation of light, they are visible only 10 minutes per hour.

The visit continues on the ground floor in a room dedicated to Bernardin’s novel of St. Peter, Paul et Virginie. Books, engravings, paintings, paintings and a monumental sculpture bear witness to the importance of this work in the 19th century. Finally, a room located after the shop hosts frequent temporary exhibitions and shows the dynamism of this museum compared to others. If you have remained captivated by the Blue Penny, the museum of La Poste should interest you. Here no stamp as expensive but beautiful collections of the Universal Postal Union and Mauritius. The museum is located on the seafront in the Doric peristyle building listed as a historic monument in 1958, which once housed the Central Post Office.

Besides the purely philatelic side, the museum also shows how the post office has been associated with the development of the island since the time of French colonization when there was a “black factor” that delivered the mail on foot to modernize services with the technological contributions while passing by the railway since 1877 and the first aeropostal connections since 1933.

This is the first Mauritian site to be made a World Heritage Site by UNESCO on July 16, 2006. The Aapravasi Ghat or Immigration Depot is the place of arrival of Indian immigrants, the ancestors of more than 70% of the Mauritian population. It was built in 1849 in a building built by Mahe La Bourdonnais in 1740. The site was declared a National Monument in 1987 and as such, it was protected from destruction. 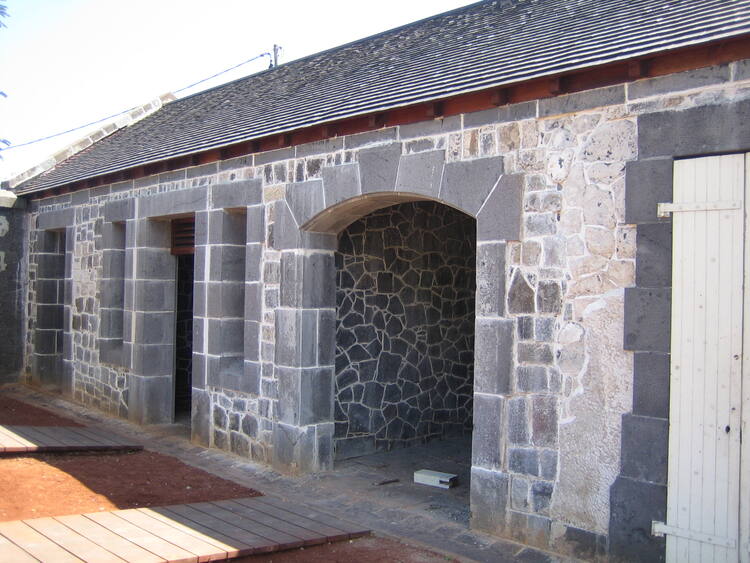 The center, one of the few exhibition spaces dedicated to indentured labor in the world, illuminates what was then called as “Great experience,” a recruitment system introduced by the British colonial government from 1834 to to meet the labor needs of the flourishing agricultural industry and to demonstrate the superiority of free labor over slavery abolished in 1835 in the colonies. 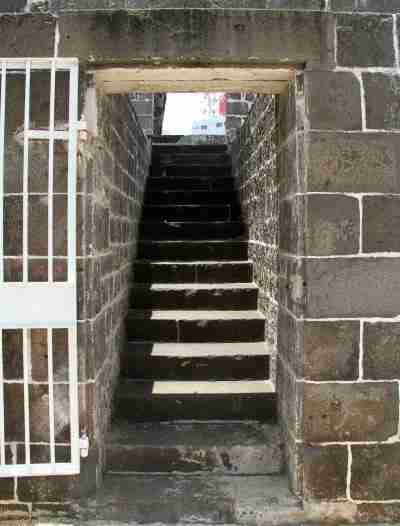