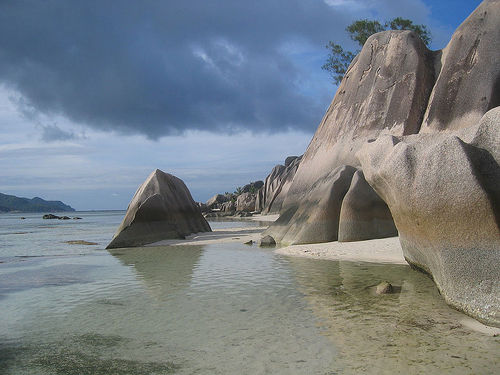 There are many more landmarks that you can visit during your holidays in the Seychelles. As you will be able to see, the Seychellois have come to realize that the environment is their country’s most valuable asset and that they are determined to preserve it at all costs. Let’s go on a tour of more of those places.

The Sanctuary at Roche Caiman

The Sanctuary at Roche Caiman is located on the east coast of Mahé. It is the only artificial freshwater wetland of the Seychelles. It is a very popular bird watching and wildlife observation spot with school children and adults alike. There, you will find:  palm spiders, water skaters and crabs, various species of freshwater fish and frogs, skinks and eleven species of birds. People won’t have to wade into the water either during their visit there, as there are boardwalks all across the sanctuary. Yoga classes are also organized there.

The Port Launay Coastal Wetlands can be found near Port Glaud in Mahé and their surface area is of 121 hectares. Those wetlands are very important for the reproduction and growth of fish and harbor two endangered bat species. Nearby you will find the Port Launay Marine National Park which is renowned for being a spot where whale sharks can be observed.

Also in Mahé, the Morne Seychellois National Park is named after the highest mountain of the Seychelles. There, you will find a dense secondary forest and shrub woodland, punctuated by cliffs and large granite boulders. Some parts of the primary forest can be observed above 600 meters. The site is an Important Bird Area as several endangered bird species nest there such as Seychelles Kestrels, Seychelles Blue Pigeons, Seychelles Scops-owls, swiftlets, Bulbuls, White-eyes and Sunbirds.

The Kreole institute is situated at the Domaine de Val des Près in Mahé in an old colonial house which was formerly known as the Maison Saint-Joseph built in 1920. Its purpose is to promote local Creole culture and tradition. Various activities are also organized there, such as traditional French song recitals, cultural exhibitions, language and literature workshops, etc.

The Seychelles Natural History Museum houses exhibits about the flora, the fauna and the geological history of the Seychelles. Its purpose is also to raise awareness about environmental issues and encourage good environmental practices.

Aride Island is the northernmost granitic island of the Seychelles. It was bought in 1973 by Christopher Cadbury who converted it into a nature reserve. The only human inhabitants there are the reserve staff and volunteers.  The island is a breeding ground to more than 1.7 million birds and is home to several species of skink, three species of gecko and three species of poisonous snakes. Green turtles and Hawksbill turtles also visit the island regularly.