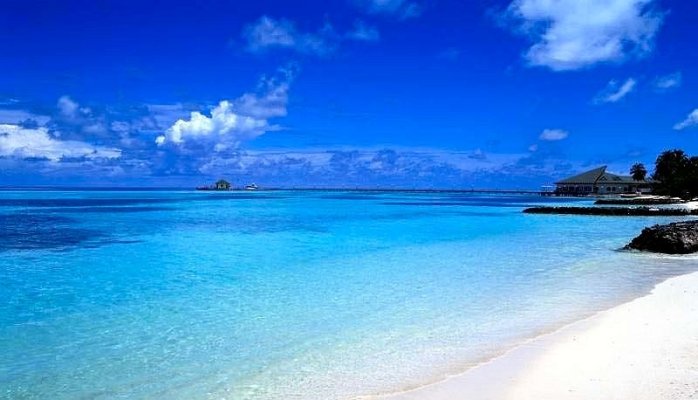 So there was a misunderstanding. A territory that we thought we knew, and of which we knew nothing. Mauritius, former Dutch colony, French, then British, east of Reunion and Madagascar, is one of the most famous islands of the Indian Ocean. Last year, it attracted nearly 1.3 million tourists, including 270,000 French. Its hundreds of hotels, mostly luxury resorts located on the seafront, are renowned for the beauty of their beaches and the quality of their service. It is so good, with straw umbrella, piña colada and cranial massage at 17 hours, that we do not leave the living room. Or once, for the guilt-free “excursion”. From this country, which we say when we return, by a vain abuse of language, that we “did”, as we did “Costa Rica” or Australia, we will have seen nothing, or if little. As such, Mauritius is perhaps the most unknown known land.

At the controls of an airplane 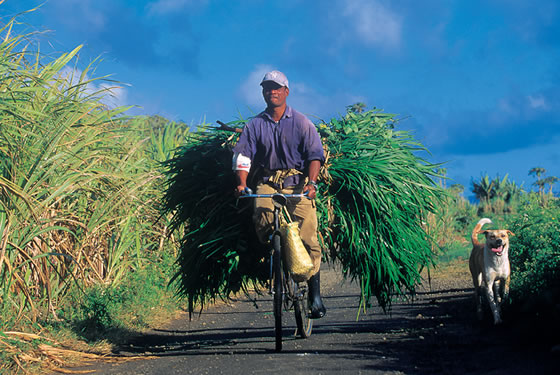 The exploration begins where the sand stops. No need to go far – anyway, by car, the island goes through in just over an hour. From Morne’s super-authored beach, it takes fifteen minutes to reach the “high”. In the village of Chamarel, small Creole houses topped with corrugated iron rivals of poetry, tinkered with the means of the edge: colored walls, lambrequins hanging at the end of the roof, flower beds tangled. Dogs roam the main street, between the cane and pineapple fields. Painted on the facade of a restaurant, a naïve dodo welcomes customers. “When we opened our boutique hotel (Mauritius Hotels), we were told it would not work. That the hotel business in Mauritius was on the sea, “remember Virginie and Jean-Marc Lagesse, owners of Lakaz Chamarel.

“The resorts are rather on the west coast, sheltered from the wind, ideal for sunsets. The south is wilder. Laurent Marrier, engineer converted into tourism

Fifteen years later, tourists and tour operators never cease to praise the comfort of the twenty rooms scattered over the 12 hectares of gardens. At the top of the estate, from the terrace of the most luxurious suites (100 m2, private pool), the view of the Morne lagoon and the Black River mountains is so clear and plunging that one would think oneself in command of a plane. “Tourists are becoming less sedentary and more and more independent, wants to believe Jean-Marc Lagesse. No need to dance in front of them to amuse them. At Lakaz, the specialty is that there is no animation. Visitors are encouraged to walk up the palm alley, open the wrought iron gate and see the country. In the surroundings, the activities are not lacking. The ascent of the Piton du Canot (526 m, two hours round trip) is from a hiking trail from the restaurant Le Chamarel. 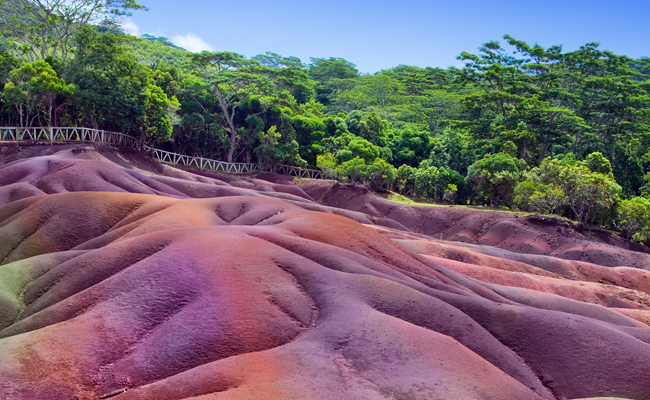 Two kilometers from the village, the river Saint-Denis feed a waterfall worthy of the Lost World: the water flows from a natural diving platform a hundred meters high in a crater surrounded by the jungle. The vegetation stops on the nearby site of the Land of Seven Colors, a geological quirk made of bare earth dunes in different shades of brown, ocher, pink and blue. The phenomenon, of volcanic origin, is explained by the high concentration of iron and aluminum. Despite the torrential rains that regularly fall on the island, the colors never mix or tarnish.

Curiosity of the island, the Land of 7 Colors, a phenomenon of volcanic origin due to the presence of iron and aluminum.

Of the three flanks offered to the ocean, there is one that the hotel has forgotten: the south coast. Too rugged. Realize, there is almost no lagoon. Breaches in the coral reef allow the sea to reach the land. The meeting of cliffs and waves is explosive. 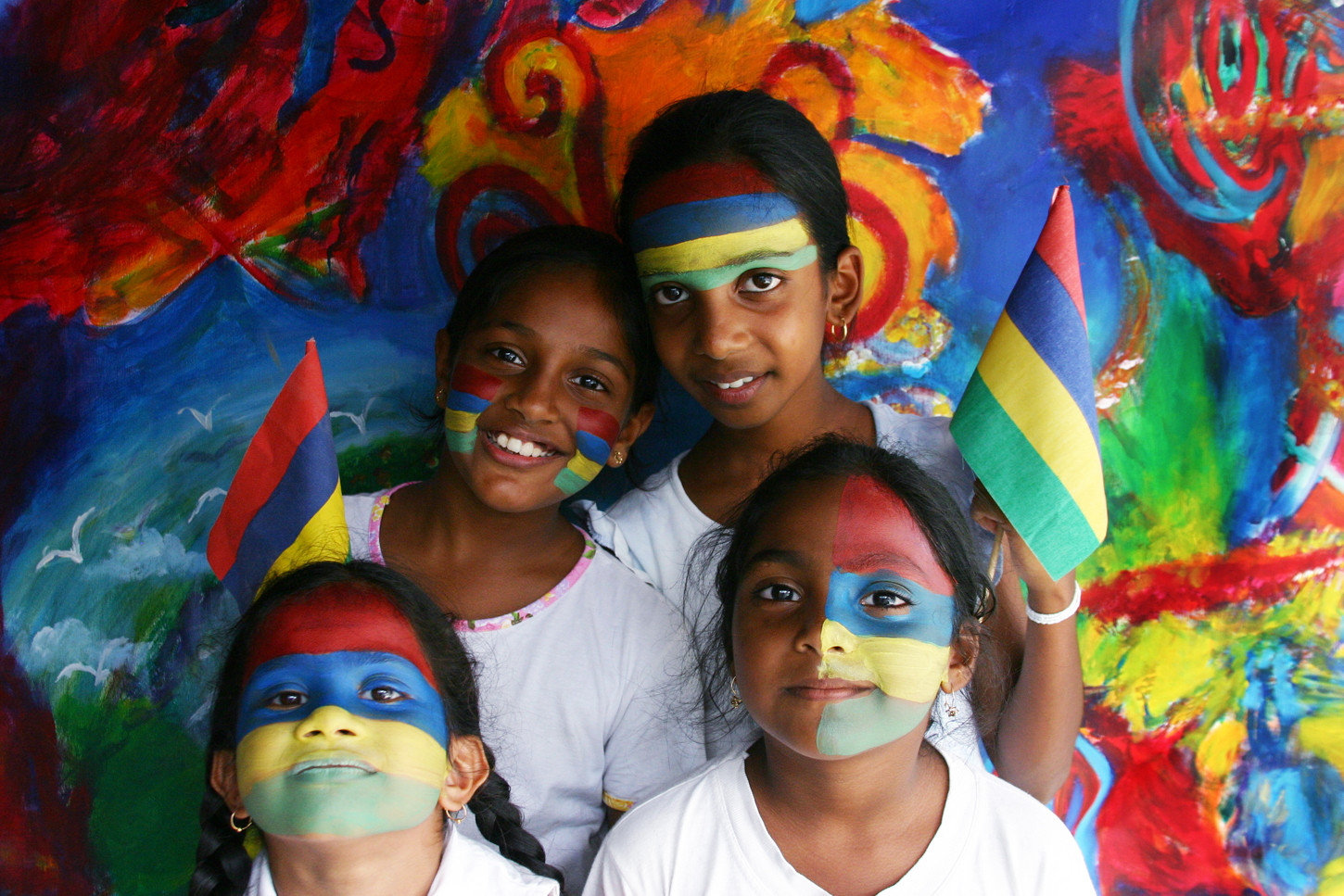 They were wrong. In a short day of stroll between Bel Ombre and Souillac, we discover the Bay of Jacotet, a real nest of pirates in the eighteenth century, a former sugar factory, a beach where Hindu women make daily offerings to the sea. The story of La Buse, a professional boarding (“better than Pirates of the Caribbean”), the golden age of sugar cane, the peaceful coexistence between Creoles, descendants of slaves, Indians and Chinese, who came to lend a hand in cane fields and shops after the abolition of the black slave trade, and the Franco-Mauritians, this white minority of which it is a part.

On the east coast, another pioneer, Julien Gufflet, founded Otentic Eco Tent Experience, a safari tents village on the banks of the Great Southeast River, which flows into the ocean. at the village level of Deux Frères. Kayaks are self-service. Half an hour is enough to go up the stream to the waterfall. An hour, if we take breaks to observe the macaques of Java that populate the trees of the mangrove. Imported in the 17th century by the Dutch, who used it as pets, these monkeys, in excess, wreak havoc wherever they go: they break the branches of trees, destroy sugar cane plantations, wriggle seeds, fruits, pink pigeon eggs and spectacled birds. It is better to keep one’s distance: for a long time poached, the “zako” are sometimes aggressive.

Of course, the good rowers can continue and descend the river to the mouth. On days of sustained rain, the earth rushes downhill with so much ardor that the water turns red. The game then consists of locating and crossing the chromatic border separating the river, ocher, from the ocean.