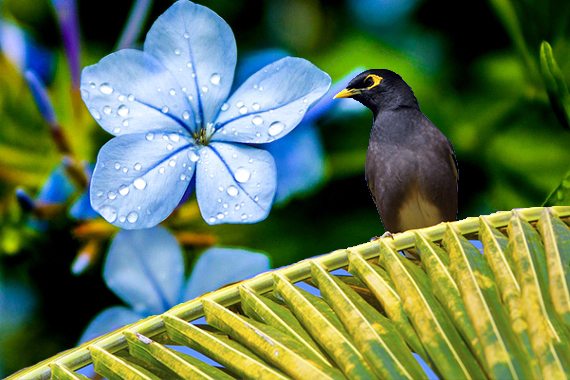 Mauritius is an ideal place to enjoy a relaxing holiday. The tropical island is famous for its unique sun, sand, sea and, without forgetting, for the heart-touching Mauritian hospitality. Situated in the Indian Ocean, in the east of Madagascar, with a surface area of 720 square miles, the pear shaped island offers visitors the magnificent landscapes of the countryside and sea views within a few miles of travel. The natural beauties of the paradise island include its sea, waterfalls, rivers, craters, natural forests and its odd shaped mountains. It is worthwhile to hire a car in Mauritius, to visit all those hidden gems on the island.

Mauritius, a volcanic island formed in the middle of the Indian Ocean, could offer only limited possibilities of natural colonization. The result is that only a few animals found shelter on the island by air or by sea – mostly birds and reptiles but no mammals except for bats. It is interesting to note that no amphibian lives on the island. Ile aux Aigrettes, off the Southeast coast of the island, has been established to assist in the revival of indigenous forests and reintroduce rare species on the island. Island Tours are available to the general public to contemplate the few native species that still exist. Those include:

This bird exhibits a beautiful plumage of bright pink and lives in the forest, eating leaves and fruit. A captive breeding program saved the species from extinction and there is now some 250 birds in the island’s forests. It can especially be seen on Ile aux Aigrettes.

Green with a distinctive blue and pink collar, this parrot was also saved from extinction by captive breeding. In 1986, there were some 20 birds, and today, the number is approaching two hundred.

It is one of the most common native birds to Mauritius. It is small, with a gray and white plumage and love wandering around the forests in noisy groups.

Most of the Cardinal population lives in the forest near Bassin-Blanc(Southern part of the island). This species is now very rare because rats and monkeys are fond of their eggs.

The Round Island skink

A large skink can reach thirty centimeters long and the Round Island species is no exception. The island can be visited and if found in north of Mauritius which now serves as a nature reserve.

This gecko with bright colors can be found in the driest areas of the island, but especially on neighbouring islets that aure usually seen chasing or drinking nectar from flowers. They are of an emerald-green with stripes and blue and red spots.

Mauritius was a green patch lost in the Indian Ocean. Formerly a compact forest covered the entire island, except on some points of the coast. And the splendid forests of “exotic wood”, with ebony trees down to the edge of the sea were tempting for merchants and captains. Quickly, Mauritian ebony wood had a great reputation in the European markets. The Dutch massively exploited Ebony thinking it was an unlimited resource.

The exploitation of the primeval forest and clearing to make way for plantations, continued with the French and the English. Now what is left of the immense primeval forest,  are only scattered patches, finally reserves protected by law, with a total area less than 2000 hectares where millennia giants are found. The majority of these reserves are located on the southwest massif: Bel Ombre, Montagne Cocotte, Petrin and Maccabee and near the gorges of the Black River.

Trees and Flowers found in Mauritius

Being of volcanic origin, Mauritius offers a haven of natural beauty when it comes to flowers and trees. Here is what you can expect to experience in Mauritius in terms of flora.

Mauritius boasts over 700 species of indigenous plants. Vividly coloured flowers decorate the island. With over 60 orchid species alone, Mauritius is the second largest supplier of plants and cut flowers in the world! Many of those plants are threatened with extinction because less than 2% of their natural habitats remain, as well as competition with introduced plants and animals that destroy their fruits and seedlings. In collaboration with the National Parks and the Conservation and Forestry Services, the Mauritian Wildlife Foundation is working to protect these species and the forest for future generations.

Trochetia Boutoniana, or the Boucle d’Oreille, is the national flower of Mauritius. It was named after the famous French botanist Louis Bouton and is endemic to Mauritius. It is now found growing wild on just one mountain in Mauritius but you may see it at some of the gardens on the island. The flower is a magnificent shrub reaching about 2 to 3 metres in height with reddish-orange flowers which bloom from June to October.

The exotic red anthurium plants are trademarks of the island and are often brought as gifts by returning visitors. Mauritius is a major exporter of anthurium flowers to South Africa, Europe and Australia. Picked first thing in the morning, the anthuriums are sold in fresh packs to stay for at least 4 days, without watering. The colours of anthuriums vary from satin white to morning-dew pink to frosted pink, and from bright orange to crimson-red.

There is certainly the coconut, brought by the ocean currents, which holds the palm of seniority among the Mauritian fruits. All other were introduced at various dates and the largest number by the French. The first citrus trees were planted by the Dutch and one of them, grapefruit (or pamplemousses) gave its name to the neighborhood where the famous garden is located. Some fruits were introduced in Europe and better acclimatized in some parts of Réunion, where the climate and altitude suit them more.

There  is an abundance of delicious fruits, especially in summer: many varieties of mangoes; lychees or litchis, succulent pineapples, avocados, longan, various lemons, guavas with the distinction between fun guava from China, and another, yellow and largest, listed in popular parlance as “Goyaves de France ” “Grenadines ” and their cousins, the” masons “(all round!), papayas, pink and pearly jamalacs, cherries, Kythira fruits that come from no less famous island of Tahiti, and the “Coeur de boeuf.” And others like the breadfruit and the Jackfruit were introduced on the island.

In short, there is enough fruit in Mauritius to cater for the wants of the locals and the tourists.

Have a nice trip on the island of Mauritius!