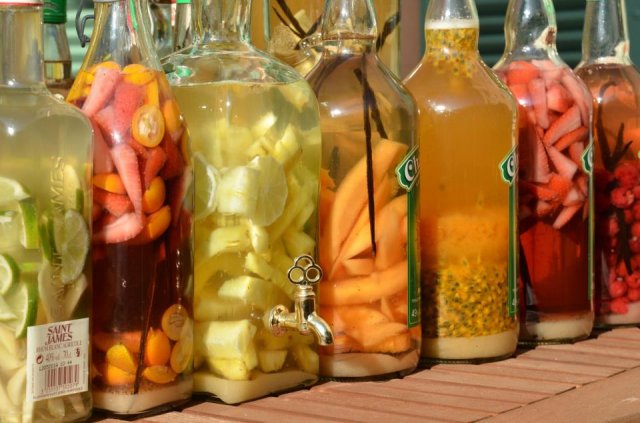 Rum is eau-de-vie from the fermentation and distillation, either from molasses or syrup produced in the manufacture of cane sugar or from sugar cane juice. In Mauritius and Reunion products are mostly called traditional rums, obtained by fermentation and distillation processes of individuals. While visiting the island of Mauritius, you will have the opportunity to visit various Rhumerie and see the process of manufacturing Rhum from its raw product to the end product – Worry not, you will have the chance to taste some too!

There are two types of traditional rums:

– The agricultural traditional rum in Mauritius, whose raw material is sugar cane juice or “cane juice.”

For the preparation of traditional rum, the process begins by diluting the molasses, residue from the manufacture of sugar, and adding fermenting yeast. Twenty-four hours later, we obtain a juice which title 5 or 6 ° alcohol and so-called wine.

Inside a first distillation column comprising of 21 stacked trays, the liquid is boiled in a steam boiler: the alcohol evaporates and gains the upper trays, while the residual liquid, called vinasse is collected on the lower trays and eliminated.

At the end of this step, phlegm that is the portion evaporated, commence cooling and condensation in a second, narrower, column. Past the sweet steam, 18 trays of this concentration column can separate the various aromatic esters of alcohol: low oils are staged on the lower trays, high oil mediums on trays while the heads, components light some of which have a green apple scent, go up to the higher plateaus. This is where distillers will compose at will aromas, thanks to the subtle dosage of the various components.

Be swept away by the sweetness of our flavored rums made from fresh fruits. From the freshness of lime to the strength of coffee, through the delicacy of vanilla, authentic recipes of homemade rums take you to another world while having an aperitif. Macerated with real fresh fruit or spices, our rums preparations contain a clever mix of rum charette. At the heart of the maceration, the ingredients pass their active principles: perfumes, flavors, vitamins and sugars to alcohol. To increase the extraction of substances of interest, the first parameter is the time, because it takes the alcohol quite some time to reach these molecules.

If you are Flying to Mauritius or Reunion soon, do not forget your bottle of Rum, since we have some great recipes of Rum Aranger for you to try at home.

Ingredients for a two-liter container.

Split into two the vanilla pod. Pour the rum in the jar where you ahve put the coffee beans and vanilla. You surely need to be a little patient to attain the perfect Rum Arranger. Allow to marinate for 3 months in a cool, sheltered place.

Ingredients for a container of two liters.

Wash the pineapple and cut into pieces (do not remove the skin). Split into two vanilla. Place the ingredients in the jar. Pour the rum. Marinate for 3 months in a cool place and away from light.

You should know that rum can be preserved for years. In the Mascarenes islands there is a wide variety of rum. Each family personalizes his. The rum is a strong drink ~ 40 °, prepared to last. It is kept out of direct light, and is left to mature and macerate for several months. Attention, consume with caution and moderation.

Similar other Rums can be prepared with your favourite fruits. The minimum maceration time is 3 months, but you can leave it for as long as you want. The older the better – just like whisky!

Vanilla Pod in the Mascarenes

Vanilla planifolia is the most prized species of vanilla in the world and it is this species that is grown in Reunion and Mauritius. The fruit of the vanilla is a long pod. At harvest time, the pod is firm and light green. The pods are grouped in clusters or “brooms”. The numerous, and black round seeds, are located inside the pods.

The harvest of vanilla

The harvest of vanilla usually takes place from June to September. This period is very delicate. Vanilla should be harvested to the point. Picked too early, the pod will dry easily. It is easily attacked by mold and rot within a few months after preparation. Picked too late, the pod splits open and it will have a depreciated commercial value.

There are some signs that identify the pod is good to pick. When it approaches the maturation, it loses its gloss; its color is light green. It’s still called tail end and it takes a yellowish tint. One should pick the pod when the pale yellow color of the tail will go on deteriorating toward the other end, the head. Farmers call this stage “tail canary”. Ripe Vanilla is called “ripe tail of canary.” The time of collection clearly identified, it must be done with extreme delicacy. The pod is seized with the right hand by gripping the butt. Right then pulled carefully to the left because it is essential to snatch all the broom to which it belongs. Do not cut with the fingernail because it may damage the stock. The conditions in which the crop is grown will determine the quality of production.

Vanilla remains the best addition to rum since its aroma and natural color gives to rum  a unique taste and color.

Have fun tasting rum in the Mascarenes. Moderation remains the keyword though.