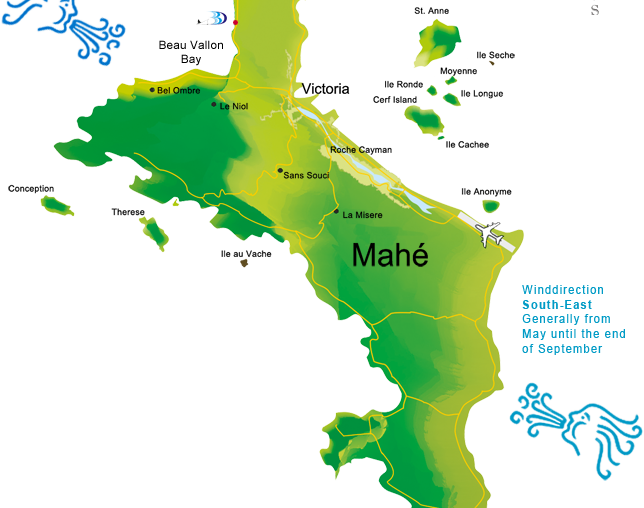 If you want to discover Seychelles, the first place you will set foot on is without a doubt Mahé since it is home to its only international airport. 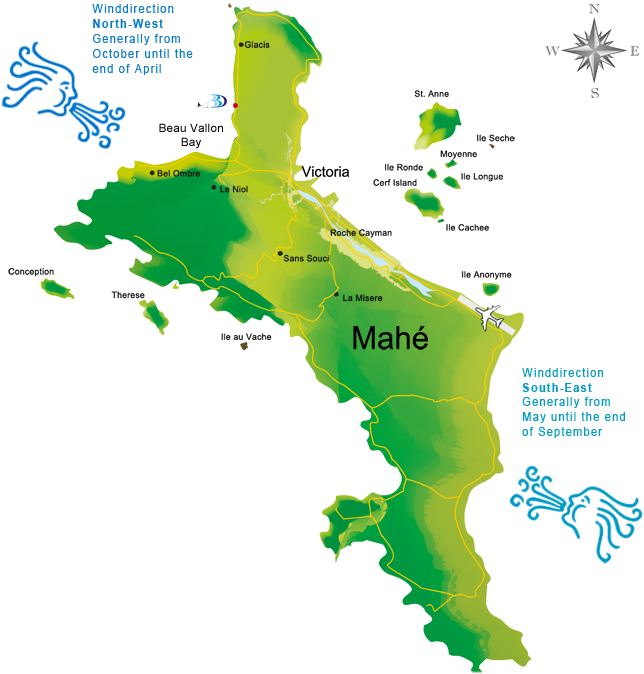 With a total Area of about 144 km2 and a population of 70000 people (90% of Seychelles’ total population), Mahé is the largest island of the Seychelles archipelagos and makes up about one third of its total area.

The island is the political and commercial centre of the Seychelles and is home to its capital City, Victoria. A colourful city representing the global lifestyle of the Seychellois Creole people which makes about 70% of Seychelles’ population.

A slow paced “city” where the inhabitants are always smiling. It seems that the time in Seychelles has been stopped a long time ago as can testify the picturesque colonial architecture of its buildings and the clock tower, built in 1903, (also known as the little big ben) standing proudly in the city centre. The clock tower makes us recall the rule of the British on the island.  Mahé is without a doubt one of the prides of the Seychelles.

You will find in Mahé two ports, both allowing deep-see vessels to dock.

Mahé was named after the famous French governor Bertrand-François Mahé de Labourdonnais. The British first landed on Mahé in the year 1609.

French people then began colonizing the island in the year 1778. The colons built their houses in Victoria, then known as “L’Establissement du Roi”.

Being a strategic location on the spice route, the island was highly disputed by the French and the British. It first started as a French colony and later became an English colony in 1812.

It was during that period, in 1841, that “L’Establissement du Roi” was renamed after the queen Victoria.

The island remained as such until its recent independence in 1976.

The international airport of Mahé was built by the British while being still under its rule in 1971. It was inaugurated by her majesty the queen Elizabeth one year later in 1972.

Found in the north east of the 115 islands making up the Seychelles archipelago, Mahé is described as a granitic island.

The island is home to Seychelles’ highest peak, the Morne Seychellois rising to a height of 905m above sea level. At such an altitude, its peak is often covered with a blanked of clouds, accentuating the sensation of lost paradise.

The island is covered with a lush green vegetation. Mainly coconut trees populate the coastal regions while on the mountainous regions, you will find tropical forests with endemic plants.

Since the climate is ideal for the growing of some plants, coconuts, vanilla and cinnamon are grown on the island. Tea plantations can also be found at altitudes greater than 600 meters.

Depending mainly on the tourism sector, it is not hard to find accommodations on Mahé. For all prices and taste, one cannot miss out the perfect option.

Since the Seychelles is an exclusive tourist destination because of its incredibly protected nature and its immense beauty, the number of tourists and hence visitors on the island is restricted to always ensure that it remains as such over the years.

From five stars’ hotels, to bungalows, lodges, villas, etc… all offer perfect standard to ensure that you stay in the maximum possible comfort.

The Seychellois people are warm and friendly and can easily be befriended. The best way to discover Seychelles is through its people.

Activities are not what Mahé lack. Numerous land and water activities can be practiced on Mahé. Horse riding, Golf, sport fishing, diving, snorkeling, sailing and much more. For the most adventurous, paragliding is also an option to discover the island at bird eye. 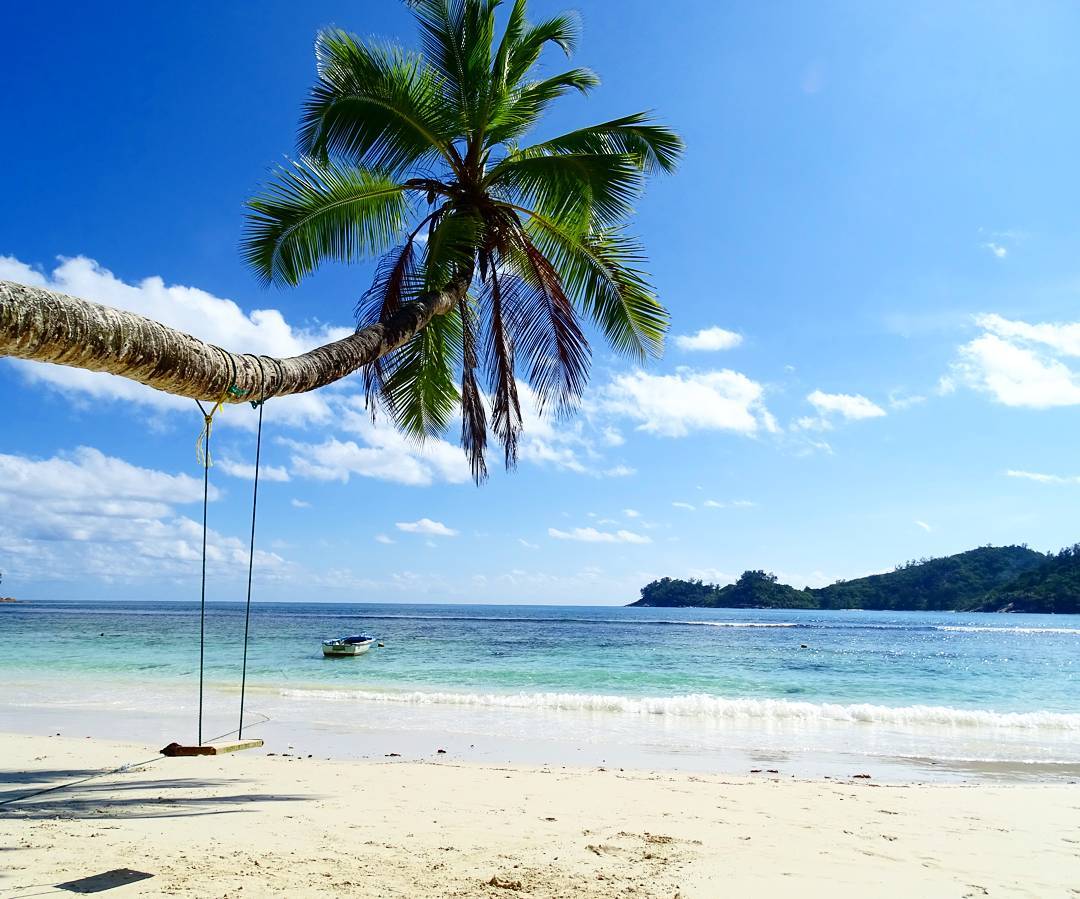 Mahé is home to the best beaches in the Seychelles.

Petite Anse is the most beautiful beach in Mahé. With incredibly soft sand, palm trees and a turquoise lagoon, the décor easily rivals with the best Hollywood scenes.  The beach is excellent for snorkeling and watching sunset.

Beau Vallon is without contest the most frequented beach in Mahé. The beach is not the quietest one in the Seychelles. It hosts a food and souvenir bazaar every Wednesday. Beau Vallon is perfect for a family picnic.

Anse royale is the best beach situated on the eastern coast of the Seychelles.

Amongst the other beaches on Mahé, we have Anse intendance, Anse takamaka, Anse forbans, Anse soleil, Grande Anse, Anse Carana and Port Launay. 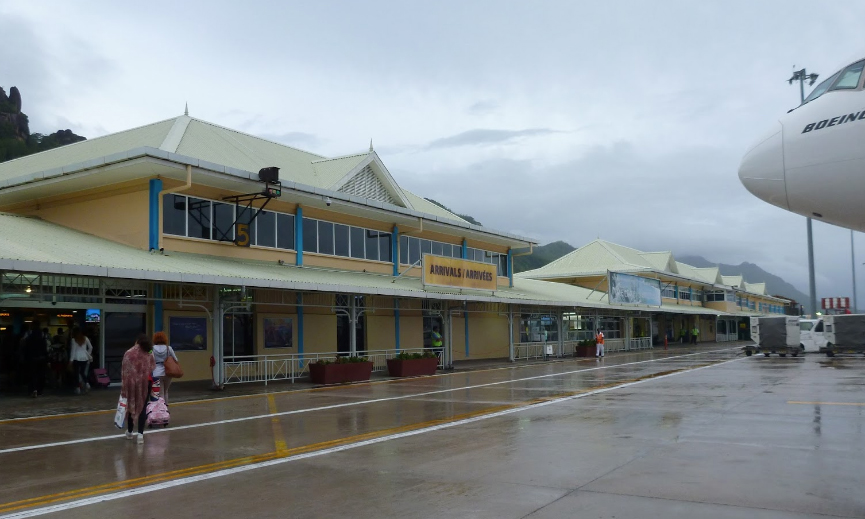 Aéroport de la Pointe Larue is the international airport of the Seychelles. The airport also serves as the head office of the national airline of the Seychelles: Air Seychelles.  Once you arrive to the Seychelles, it is compulsory that you disembark at Mahé before taking domestic charter flights to other destinations. Bird Island, Denis Island, Fregate and D’arros can be reached from Mahé.

To book a charter or to find out more about charters, please email the Domestic Charters Operations of Air Seychelles at [email protected] or call us on [248] 4391068.

The Sir Selwyn Clarke Market is one of the symbolic sites of the Seychelles. Also built during the British rule in the year 1840, it boasts of a charming Victorian architecture. The market was renovated in the year 1999. This lively marked can give you a foretaste of the culinary style of the Seychellois. The colorful fresh vegetables and tropical fruits only calls for the click of your camera.

You will also find a variety of spices, local crafts and souvenirs.

The national history museum of Mahé is found in Victoria and is housed inside a building with a beautiful colonial architecture, making of the place a rather authentic and unique place to visit whilst in Mahé.

The museum has various sections on anthropology, geology, zoology and botany. The museum mainly aims at promoting the conservation of the natural heritage of the Seychelles.

There is a very low entry free (about SR 15.00 for non-residents) which is used in the conservation of nature.