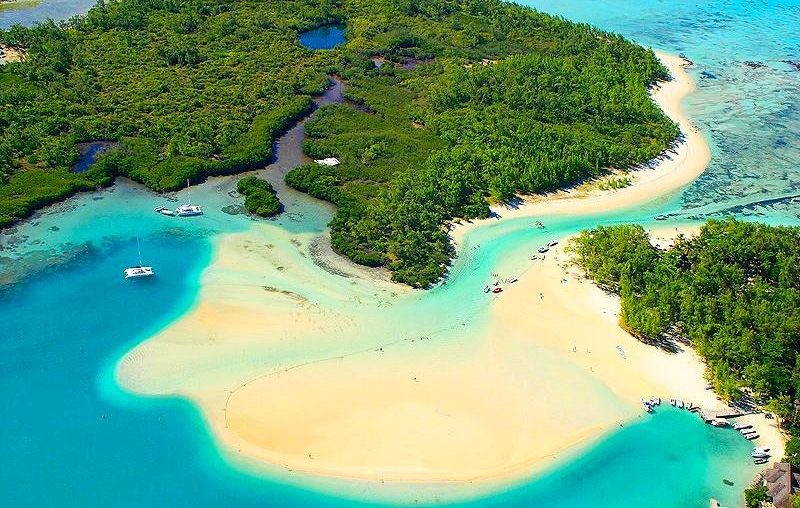 There are many islets around Mauritius, all beautiful and unique in their own particular way. île aux Cerfs, an island extending over an area of 79 hectares, situated on the eastern coast, a few steps from Trou d’Eau Douce, can be reached in 15 minutes by boat from the coast.

An aerial view reveals the dramatic shapes and colours of the lagoon surrounding îleeaux Cents. It is a sun worshippers’ paradise, perfect for sunbathing. The rays of the morning sun hitting the isle is a dream sight This tiny isle, deli­cately poised on the blue pastel sea, is a pearl in the Mauritian landscape.

How to get there?

A regular boating service ensures visitors safe and secure crossing to the island. However, visitors and picnickers are advised to make an early start to avoid congestion and obtain a suitable place for pitching a small canvas tent or secure a shady place for leaving baggage or resting and protecting from the scorching heat. In the afternoon, an early return too is advisable to avoid last minute rush that may end in disaster.

The islet has surely been named for stags exis­ting on it. It was inhabited by deer the Dutch brought from Java. Now there are no more. The development of tourism has brought the islet into the limelight. The construction of Touessrok helped a lot in the develop­ment of the island by boosting its charm to attract more customers.  Its care and maintenance fell within the jurisdiction of the hotel that still sees to its smooth administration and controls the flow of visitors and the food that they carry along with them.

The popularity of the island is going crescendo as it provides unusual pleasures and fares to its votaries. The island so far has not suffered drastically at the hands of man for it still retains most of its pristine charm and beauty of a mini woodland lost in an emerald and pastel blue sea ruf­fled by the South-East Trades Wind. The ripples that glisten on the water on a calm and placid sea present a wonderful sight that one can go on admiring for hours on end. The thundering of me waves or the soft sound coupled with the rustling of the foliage pro­duce at times a mellifluous music or at times an ear-splitting cacophony.

Ile aux Cerfs like Chamarel has developed into a cynosure due mainly to its natural charm reminiscent of Shakespeare’s description of England in King Richard II. “This precious isle found in a silvery sea….” It is known for its lagoons, its natural swimming pools, superb sandy beaches like everywhere in the island. It7s the most frequented excursion destination in the island. It welcomes around eight hundred visitors every day. The island reckons a lush and green vegetation on the western flank confining the tourists within a radius of four hundred metres around the landing place. It is a very beautiful place that immediately takes the eye captive There are many rovers around that pro­pose cruises or short trips or fishing expeditions. The trips sometimes include travels towards the cascade of G.R.S.E though sometimes access to it is difficult and even risky.

There is a lot for the eyes to see… There is a nice lagoon near the landing station. It is pleasant for swim­ming. It has a soft slope that children take much delight in by gliding down Gift shops stand in a line arraying different items like pareos, straw hats, swimming trunks, sports shoes, umbrellas, bracelets and coral necklaces, the proud products of Mauritian crafts.

What to do on île aux Cerfs

There are two restaurants, Paul et Virginie and Le Marche that cater for all tastes but at an unaffordable price by locals. The latter bring their own bread and soft drinks or water There is plenty to do. On the right of the landing sta­tion the azure blue sea with pure white sands are per­fect for both basking and swimming. The calm waters of the lagoon are ideal for water sports such as snorkelling, relaxing over a long, lazy lunch is almost compul­sory. It has also a crazy golf course. It is a par-72, 7,056-yard course that extends over 94 acres amongst tropical vegetation. It has 9 lakes and small greens that enhance the beautiful panoramic view suitable for film shots. Hiking, leisurely strolls in a natural setting with filao trees and other shrubs and its endemic fauna and flora, exotic plants that have survived the test of time and man’s defiling hands need be preserved. The rare spe­cies in terms of birds like the mynas, the redbird, the tiny crawlers, the lizards, the chameleons, die mongoose, a few rare plants, creepers and other savage flowers still tantalize the visitors.

A ramble along the sandy beach reveals a different facet of the island that may qualify it as a nudist para­dise. Tourists lie almost naked on the sand and attract curious sex starving people who take advantage of washing their eyes. The more intrepid ones do enjoy some sex with their partners as the atmosphere is conge­nial to such a ritual. There is the feeling of having spent a nice time at the end of the day.

The visit might be fun­nier had staying overnight under canvas been allowed. Unfortunately, the isle has to be vacated at 5 p.m. The visitor may borrow the road from Bel Air and proceed to Trou D’eau Douce and then turn right along a road with a splendid view it’s bordered by trees bea­ring red or yellow or pink flowers at intervals. They are very aesthetically planted along both sides of the road that leads to the landing station with a spacious par­king lot for safe and secure parking. Ile aux Certs is in fact a garden of Eden as many tourists declare otter visi­ting it.