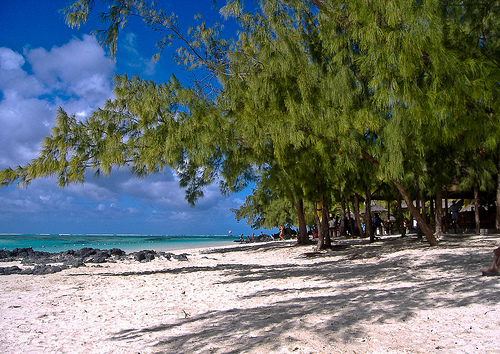 The East of the island of Mauritius is a very interesting place for tourists to visit and stay at during their holidays in the country not only because of the high number of hotels and luxury villas implanted there, but also because of the numerous attractions available. In this article, we will take a look at some of the interesting places that can be found in the East of the island of Mauritius.

The National Park of Bras d’Eau is well worth a visit during holidays in Mauritius. It can be found in the region of Poste Lafayette. The park’s surface area is of about 500 hectares and apart from the occasional wild boars and monkeys, several species of trees as well as endemic animal species such as the Mauritian Kestrel, the Mauritian White-Eye and the Mauritian Paradise Flycatcher, among others, can be found there.  Tourists visiting the park will also find an old sugar factory and a lime kiln in the area. Nearby you will find welcome stops along your exploration of the east:  the Bras d’Eau public beach and the Poste Lafayette public beach.

The nearby town of Poste de Flacq is well known for its concentration of luxury hotels in Mauritius. Some big hotels in the area are the Constance Belle Mare Plage Resort and Spa and the Constance Prince Maurice Resort and Spa. Golf enthusiasts will be delighted to find an 18-hole golf course belonging to the Constance group nearby. Other hotels are the Saint Géran, Long Beach, Ambre, etc.

One big attraction in the area is the Water Leisure Park, known locally as the Waterpark. It offers aquatic attractions for all the family including giant water slides, a wave pool, water cannons, tube rides, waterfalls, etc.

Further down, you will find Belle Mare Beach, which can get quite busy in the weekends, although the beach is large enough to accommodate lots of people. People looking for a much quieter beach should head even further down towards Palmar. The Palmar public beach is known to be very quiet. The major Mauritian hotel of the area is the Crystals Beach Resort and Spa, which is a 4 star hotel that was built in 2012.

The next beach along the way is the Quatre-cocos beach. The surrounding area is largely undeveloped, with casuarina trees providing plenty of shade. This region is also home to some smaller hotels as well as some luxury villas.

Further down, you will find the Trou d’Eau Douce beach, named after the small town nearby. It is mostly known as being the point of departure towards Ile aux Cerfs, a known for being favourite picnic spot among the locals and tourists. Ile aux Cerfs is also home to an 18-hole golf course which is maintained by the nearby Touessrok hotel. Other hotels in the area are the Laguna Beach, the Four Seasons and Anahita. Another 18-hole golf course closer to these hotels is the Four Seasons Golf Course which was designed according to USGA standards.

The next attraction along the way might be Grande Rivière Sud-Est which is the longest river in Mauritius. Boats can be charted for trips up to the waterfalls up the mouth of the river.  Further down is Pointe du Diable, where the ruins of an old French fort can be found as well as several cannons.

Next along the road you will find the town of Vieux Grand Port. Not only was it the first region of the island to be settled both by the Dutch and the French, but a very important battle in the history of the island took place off its coast: the naval battle of Vieux Grand Port, which took place between the French and the British fleets in 1810. Major attractions in the area are the Frederick Hendrick Museum which was the first fort erected by the Dutch on the island, the Valley of Ferney where activities such as quad riding, horse-back excursions, archery, mountain biking, and buggy rides are offered. The Vallée of Ferney is also a nature reserve of 200 hectares where many endemic species of Mauritius can be found.