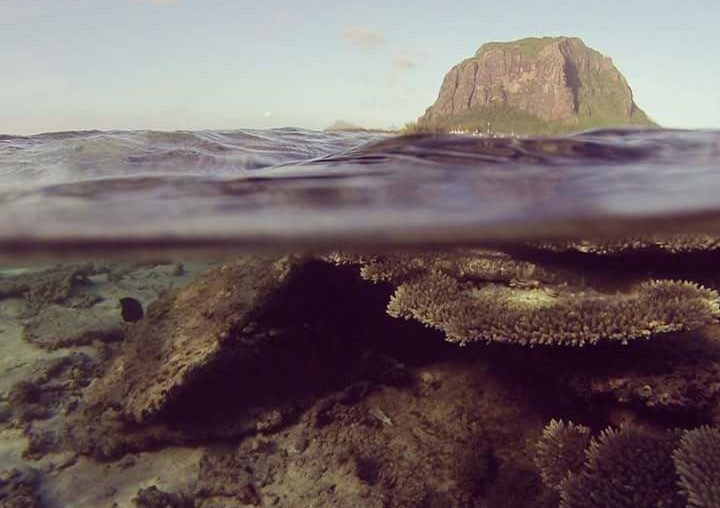 Diving in Mauritius – Whales and Sharks

If a scuba diving center advertises “On the menu today: dolphins, sharks and whales!”  in the morning on you are definitely lucky. Mauritius is not only on land, but also under water a real garden of eden. Clear turquoise seas, an abundance of live coral reefs and beautiful tropical fishes. There is no typical “diving season”. Beautiful conditions exist all year round but the visibility can, of course, be affected by waves, plankton, tides or rain. Here is how it was the first time I came to come across sharks and whales!

My trip starts there, in the northwest of Mauritius, after leaving my beautiful villa. In the background, the mountains, Pieter Both can clearly be seen from there.

6:30 am – The crew loads the bottles, two per person as we will be at sea for the day and we will dive twice.

7:00, everyone on board, the captain gave the order to cast off and we quickly leave the Trou aux Biches bay for the lagoon. Behind us the mountains of the island of Mauritius are looming in the mist of the morning, before the silhouettes of the northern islands that aspire us.

We sail blithely on a mirror sea when a fellow cries: “Whale! “. We are beyond the island of Coin de Mire, and our captain made a wide U-turn to reach the spot where the whale has left a large white surface trace, testimony of his ascent to the surface. Engine idling, we are all on the front of the boat and on the upper deck to watch in all directions.

Encountering whales, is an incredibly moving experiences. It will bring you into contact with strikingly beautiful scenery, unspoiled landscapes and wonderful animals. When you see the whales, the sight is unbelievable. Everyone has their own way of describing this incredible sight. Sometimes instead of the usual outbursts, it is the deafening silence of being lost for words as you hear the enormous humpback whale take one last breath before a dive.

Megaptera novaengliae in Latin. Better known under the common name of humpback whale or humpback whale or humpback. The species of the Southern Hemisphere lives six months in Antarctica during the austral summer sea and dates back to the warm waters of the tropics during the winter to mate and give birth. These whales arrive in Mauritius waters in the month of June and leave in late October.

We lose track of time. Aboard adults swoon with cameras in hand, welcoming their images.

But we also want to dive, and to do our first dive without much delay we head to a site where we are told we will be able to encounter sharks! Yes, SHARKS!

Our sailor was the one who introduced the famous Shark Tank, then accompanied the worldwide TV crews and scientists who wanted to film the legendary pit which I was about to visit. One of the divers hesitate to get off, sharks are not friends, she apprehended. But everyone encouraged her and we know that if our specialist aboard are asking us to follow is that there is no risk. Subject to compliance with the instructions. Small pre-dive briefing , recommendations, and jump right into the blue.

The water is clearer here than near the island – it is of a beautiful silky blue and is clear and clean. Diving in Mauritius will allow you to contemplate colorful tropical fishes but also pelagic species. Here are scorpion fish, stone fish, lost of different eels, and you will see sharks here too: black tip reef sharks, bull sharks and Grey sharks. Pretty kaleidoscope of colors and materials.

The Shark Pool in Mauritius is a new site in the form of arena in which grows the baby sharks and where pregnant females wait. We follow the teacher who leads us into a gully following the ebb and flow of reflux. We are less than 14 meters deep, and we enter a circular arena, circled round a pile of rocks, polished by millennia. Each is positioned as we had been recommended earlier, down on the rocks, slightly behind the arena.

Encountering Shark during a scuba diving in Mauritius.

Inside, two large females ready to give birth rotate in wide circles, belly full. With very fair skin, white belly, they seem to expect the time toiling like a pregnant woman.

Around them and in a happy mess, small sharks spree. A nursery of fifteen representatives of this species much maligned and therefore in danger. Loud, they pass under our noses without much noticing our bubbles, as if our presence was of no interest. Nothing substitutes the thrill of diving with sharks. You won’t feel it until you live it. In case you do not get that lucky, the Mauritian sea will still live up to your diving expectations with its wide variety of reefs and marine treasures.

In the meantime, tell me: you, would you go see whales? And who would be tempted by a special shark dive? Have you ever had, and where? You tell me!

Have a nice dive!