Cyclones in Mauritius and Reunion 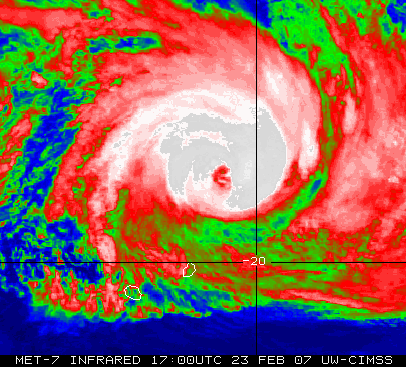 Having holidays in one of the Mascarene Islands- Mauritius, Reunion and Rodrigues– and heard a cyclone was approaching? You are not particularly familiar to such situations and you are asking yourself loads of questions? Here are the answers to those questions. Whether you are in a hotel or villa, these information will surely be useful to you!

While the south-east trade wind blows the whole year through and actually is a harmless and can even be a pleasant event, when it comes to cyclones the situation gets serious.

Cyclones usually show up during the months of January to March. According to statistics, Mauritius is in the centre of a cyclone only every 5 years. Still, every year the island is hit by the remnants of 3 to 5 storms.

During the cyclonic period, if a cyclone is approaching the island, one should immediately look for a shelter. Hotels have to bring into safety everything what is not cast-iron. On the sea, metres-high waves are formed, torrential rainfalls descend on the island, the wind takes the roofs and the trees with it. The spectacle only takes a few hours, then the weather calms down again and the extent of the destruction gets visible.

There are only extreme destructions if the cyclone passes straight over the island, thus with its eye. But also when a cyclone passes Mauritius at a distance of a few hundred kilometres, the consequences are noticeable on the island: there are stronger rainfalls than usual, the wind blows fiercely and the sea breaks some massive waves against the coral reefs and/or the edge of the island.

Storm warnings are made public on TV and radio.

Cyclones threaten Reunion from December to April, with a maximum risk between the months of January and March. However, in the cyclonic basin located in the south west of the Indian Ocean, some mature cyclones have been observed in the month of October and May.

Although statistically, it appears that the eastern and north-eastern part of Reunion are the more exposed areas on the island, all areas of the island are nevertheless likely to be affected by the most active part of a tropical cyclone. (the most violent area, quite small, in the heart of the storm). Yet, tropical storms can cause serious damage when they pass close to the island since they can generate very heavy rains.

Tropical depression: Tropical disturbance in which the maximum of the average wind speed is estimated to be in the range 28 to 33 knots (51 to 62 km/h, force 7 in the Beaufort scale).

Moderate tropical storm: Tropical disturbance in which the maximum of the average wind speed is estimated to be in the range 34 to 47 knots (63 to 88 km/h, force 8 or 9 in the Beaufort scale).

Severe tropical storm: Tropical disturbance in which the maximum of the average wind speed is estimated to be in the range 48 to 63 knots (89 to 117 km/h, force 10 or 11 in the Beaufort scale).

Tropical cyclone: Tropical disturbance in which the maximum of the average wind speed is estimated to be in the range 64 to 89 knots (118 to 165 km/h, force 12 in the Beaufort scale).

Intense tropical cyclone: Tropical disturbance in which the maximum of the average wind speed is estimated to be in the range 90 to 115 knots (166 to 212 km/h).

Very intense tropical cyclone: Tropical disturbance in which the maximum of the average wind speed is estimated to exceed 115 knots (212 km/h).

Centre of the tropical disturbance: Geometric centre of the cloud eye or, if not discernible, the wind/pressure centre.

Passage of the ‘EYE’ of the cyclone

Beware of the passage of the ‘EYE’. Do not assume that cyclonic conditions are over. The calm period is always followed by violent winds from the opposite direction.

Do not leave your hotel or villa until the all-clear signals have been given by relevant Authorities. Beware of fallen power lines, damaged buildings and trees and flooded water courses. Do not venture into the rough sea or even on the beach. Do not consume fallen fruits. Boil water for drinking purposes.

Issued 36 to 48 hours before Mauritius or Rodrigues is likely to be affected by gusts reaching 120 km/h.

Issued so as to allow, as far as practicable, 12 hours of daylight before the occurrence of gusts of 120 km/h.

Issued so as to allow, as far as practicable, 6 hours of daylight before the occurrence of gusts of 120 km/h.

Issued when gusts of 120 km/h have been recorded and are expected to continue to occur.

Issued when there is no longer any appreciable danger of gusts exceeding 120 km/h.

The danger is approaching and is expected within the next 24 hours. Schools are closed but economical activities continue normally. It is recommended to regularly listen to the radio and prepare to stay safe.

Imminent cyclonic danger. The cyclone will affect the island or its immediate periphery in the coming hours. This passage in red alert is announced with a notice period of three hours. All utilities and businesses are closing. Everyone should stay sheltered and should not leave their house or hotels for any reason. Remain constantly hooked to your radio.

Cyclonic threat is removed but there are still dangers. All schools remain closed but economic activities can resume. At any time, if the hurricane danger has passed, the prefect may pronounce the end of the hurricane threat.

If you are lodging in a hotel on any of the islands- Mauritius or Reunion, then you will be well-looked after and only need to follow directions. Stay out of the sea throughout. Some hotels even organise special events to entertain their guests who won’t be able to go out or hit the beach.

If you are living by yourself in a self-catered accommodation or villa, then you might have to stock up on some candles and torches in the event of a power cut, unless the owner provides you with them. Power cuts are one of the first things to occur during a cyclone as electrical lines are damaged by broken branches and trees or the electricity company simply decides to cut power for safety reasons. Also stock up on food and water as you do not know for how long the shops will closed and make sure you have enough batteries to listen to the radio for further updates.

If I were to leave the island on the day of a cyclone, can I still catch my flight?

The airport authorities will normally close the Airports as soon as flight safety is estimated to be compromised within the coming hours. Incoming flights will be delayed whilst in-flight aircraft will be diverted to other destinations.

In all cases, as from a Class III alert/ Red Alert the airport no longer operates and all ships would have left harbors for the high seas.

Some few hours after a Termination/Safeguard Phase bulletin, all delayed flights will start converging towards Mauritius and eventually aircraft will be queued for take-off. Be prepared to experience some stressful moments at the terminals if you are leaving.

Well if you are going through a cyclone, Stay safe and be Careful!