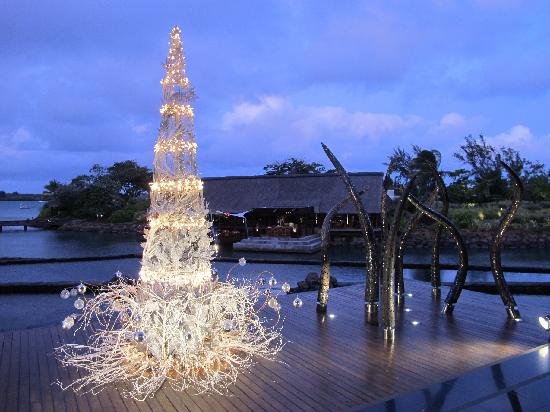 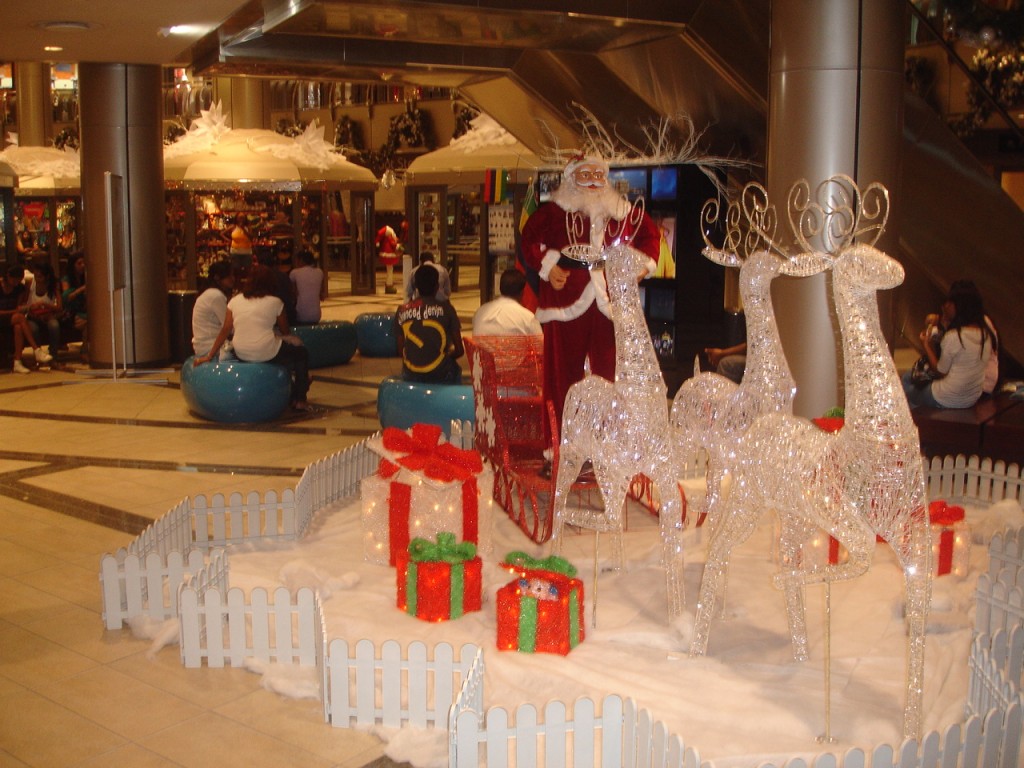 Mauritians enjoy Christmas celebration in a lively tropical summery atmosphere under a usually scorching sun with 26 to 32ºC and even above at times. Yet, this does not stop Santa Claus from popping in with loads of presents for young and old. He certainly brings along enough snow to keep him cool and hydrated during his long trip in the tropics!

During this period of the year, the splendid flame trees are in bloom with their bright red fiery flowers. During your stay in the hotels or villas or while visiting the island, you will come across Tropical fruits like mangoes of all sizes, colours, shapes and flavours; pineapples; litchis(Lychee); Longan (Dragon Eye Fruit); and watermelons abound. Shopping centres are livelier with Christmas decorations, animations and shows attracting crowds during the day and late night shopping. Every street corner is invaded by hawkers selling Christmas cards, toys, balloons, firecrackers, gifts, clothes and a wide assortment of household items. The noise, heat, crowded streets and traffic jam can be unbearable in towns. Being the holiday season for schools this remains the most exciting time of the year for kids and teens.

Tourist season is at its peak in December and most of the hotels hit a 90 to 100% room occupancy rate. While many workers are on holidays, many others are not allowed holidays as Christmas time in Mauritius, just like in many countries around the world, remains the most commercially profitable period of the year. Hotels in Mauritius makes special offers during this period of the year for those wanting to spend Christmas in the sun or simply for those who want to experience Christmas in a very original way while tasting Mauritius’ delicious cuisine and enjoying the beauty of Christmas on this tropical paradise.

On Christmas Eve, most people set up and decorate their Christmas trees which vary from natural pine and spruce trees to artificial ones. The house, especially the living room is also decorated. Christmas carols are mainly heard on radio/television and in shopping centres but most Mauritians do not play Christmas carols at home.

Christmas Eve is celebrated in various ways in Mauritius’ multi-ethnical society. While most would rather enjoy the Christmas frenzy in the remarkably crowded and highly animated night life in towns, Catholics would be attending the mass and other families would be having a normal evening with a typical Mauritian Xmas dinner- usually a BBQ or something special!

The western traditional dishes like the stuffed turkey or Christmas pudding are slowly entering the Mauritian culture. Christmas cakes like the Bûche de Noël remains a very demanded and consumed commodity just like wine, scotch whisky, rum and champagnes. As usual, the night of December 24 in the Mauritian families is all about gifts and many also usually blow fireworks at midnight.

Traditionally, Christmas gifts are offered to kids and young people  and is placed under the warmly decorated Xmas Tree. Gifts are opened in the morning on Christmas day and most kids believe in Father Christmas. Christmas day is a public holiday marked by family gatherings at home or at the beach. Dishes normally depends on religions, cultures and tastes.

Following the annual traditions, gatherings take place at grandparents’ place, many also spend the day at the beach or stay at their beach house or rent one for the festive season. Beach houses are usually fully booked during this period and very often so for several years in advance. Since New Year’s Day and January 2nd are public holidays in Mauritius, the gatherings and celebrations last for about a week.

Christmas in Mauritius coincides with peak summer and therefore is a far cry from the cold European Christmases’ you might be familiar with. Wearing your shorts or bikini on Christmas day might be weird to you but it is certainly the norm in Mauritius. Many businesses in the hospitality industry are open as normal on Christmas day so finding somewhere to eat, drink and be merry is not an issue.

Traditionally, many Mauritian families consider Christmas as a celebration for kids and young people and therefore tend to celebrate more on New Year instead. This implies that very often home preparations are mainly geared towards New Year celebrations rather than Christmas celebrations. As soon as the Christmas frenzy is over, a significant transformation occurs on streets as hawkers replace their toys’ stands with firecracker displays. Streets remain busy as Mauritians prepare their New Year celebrations. On New Year’s Eve, the ‘réveillon’ is celebrated in various ways either peacefully at home or with family gatherings, in a feast, parties or barbecues in the same way as or even better than on Christmas eve. Many people (especially the young people) organise private parties or go to nightclubs. Many like to stay in front of the TV for special New Year sega dance shows on the local channels or keep an ear on the radio for the final results of the ‘Song of the Year’ contest. The whole country’s effervescence reaches climax as the clock strikes midnight and fireworks bombard the sky and gardens to welcome the new year. Celebrations continue through the night and often until dawn.

The flame tree blooms mainly during the festive season in Mauritius and is commonly called “fleur banané”, the New Year Flower

New Year’s Day is considered a very important celebration for Mauritians. Celebrations take various forms. However, most Mauritians wear new fancy clothes, many go to the church and temples in the morning and visit neighbours, relatives and friends throughout the day to convey their greetings for the new year. Many Mauritians also prefer to stay at home on New Year’s Day and receive their visitors while others will be hosting family lunches or dinners. Many fast and consume only vegetarian dishes and fruits. The traditional and most important aspect is the family togetherness and the exchange of gifts.