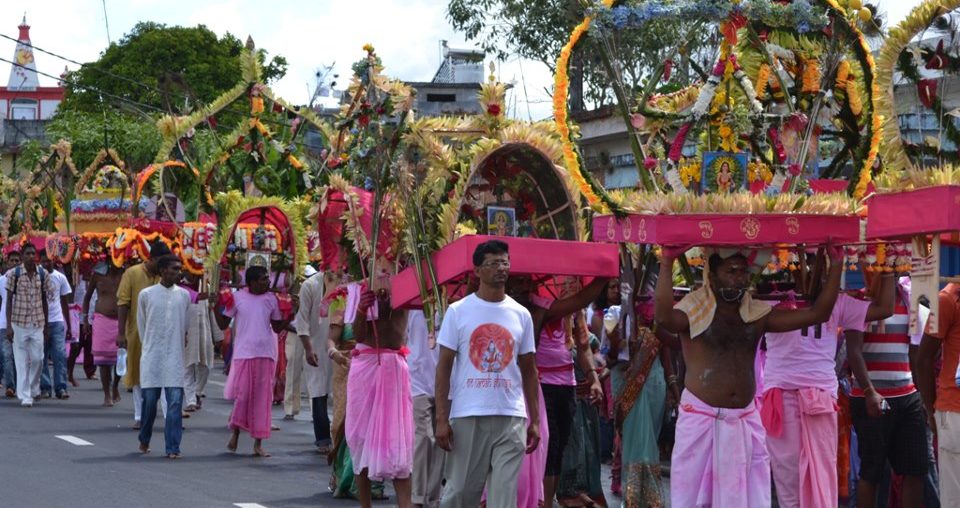 Cavadee in the Indian Ocean

Cavadee is normally celebrated in January or February. Along with the fire walking and sword-climbing ceremonies, Cavadee is one of the most important Tamil festivals. Their bodies pierced with needles and their tongues and cheeks with skewers, devotees trance-like and in penance, trek along bearing the “Cavadee”, a wooden arch covered with flowers and a pot of milk at each end of its base, to place it before their god in the temple. At this point, despite the long hot trek, the milk should not have curdled.

The ten days celebration in honor of Muruga- a Tamil God- gives a particularly touching and impressive scenery in the holy Sri Lankan city of Tamils, Kataragama. Like all religious holidays, Cavadee originates from a very ancient legend. It features an Idumban  to whom his guru, the famous sage Agattiyar asked to go to Mount Kailash and bring back the tops of two nearby mountains. This is what Idumban, accompanied by his wife, did. He tied the two peaks at the ends of a yoke (Cavadee) and set off. The god would have rewarded him for his faith and spiritual strength, expressed by the feat accomplished, but the circumstances were such that the meeting went wrong and Idumban lost his life in the end. On the request of his family, he was however revived, by a peaceful god, who then proclaimed that those who would bear the Cavadee to the temple would get his grace.

You can see there, including a parable recalling how difficult the path of spirituality is, however, he who knows not to give up gets the ultimate prize. On the island of Reunion, the Festival lasts Ten Days and is celebrated on different dates usually occurring in the months of January or February in St. Andre and St. Louis, in April or May in St. Pierre and in August-September in Saint-Denis. The celebration normally begins with the erection of a post (naktal) near the temple meaning the entrance in a sacred time, while the Lord Muruga is shown to the public in a Pandal (Altar). Everyone will then receive his Darshan (Blessing).

During the 10 days, several rituals such as repeated purifications, the rise of the flag, the attachment of saffron cord around the wrist, the divine representations and objects worship. Forty-two “koumbam”, each symbolizing a deity is made and installed to draw a “lingam”; the priest will conduct a puja(prayer) for each of them, with special attention to Muruga. Every day a procession is also held around the temple, whose aim is to circulate royally bronze statue of Lord Muruga and his two wives among mere mortals. New offerings of coconut, saffron water and lights are made.

Thaipoosam cavadee is one of the most popular festivals celebrated by Indo-Mauritians whose ancestors originated from Tamil Nadu, India.

The festival, which is held in either January or February each year according to the Tamil calendar and in devotion to Lord Muruga, is preceded by the kodietram.

Ten days prior cavadee, a flag hoisting ceremony (kodietram) is held and celebrated in a grand pomp of incantations and devotional music. The flag will float to the end of the festival.

All around Mauritius, the rituals are performed in temples which are known as kovils and characterized by their Dravidian architecture. Amidst recitation of prayers, flowers and sandalwood are offered alongside burning of camphor to implore Lord Muruga’s grace.

Thus, start a ten-day purifying period of fasting, prayers, penitence and atonement for those devotees who will participate in the cavadee ceremony.

Besides abstinence from sensual gratifications, a rigorous vegetarian regime is observed and joined in by family members. Prayers and verses from Hindu epics are daily recited at home and kovils for the removal of passion and desire.

The jaunty ethnic characteristic of ThaipoosamCavadee may very well impress as much as fascinate the casual onlooker. On that day fervent devotees to the cult of Muruga, accompanied by relatives and friends, will gather near river banks for the ablution rituals or near the sea. Dressed in fuchsia or saffron-colour cloth, they will join the officiating priest in prayers and mantra-chanting. Fruits, incense sticks, rose water, milk and clarified butter are offered as oblations around sacrificial fires for self-purification and sanctifying the Cavadees.

If you are spending your holidays in one of the Mascarene islands during this period, you should definitely not miss the beautiful processions you will encounter at every street corner. Whether staying at a hotel, a villa or an apart, leave the confined space of your room and head towards the nearest city or village. You will definitely enjoy an unparalleled scenery. You might even be offered lemon juice, since it’s a source of purification for them.

Do not miss this opportunity and Happy Cavadee!