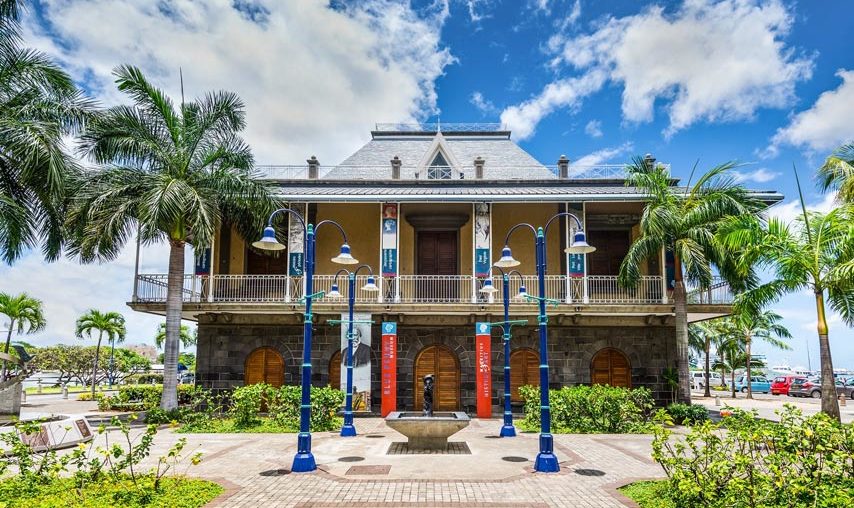 Located in Port Louis, at the Caudan Waterfront, the Blue Penny Museum is one of the most beautiful jewels of the Mauritian cultural scene. It pays tribute to the heritage of Mauritius, through a presentation of its art and history. The museum houses unique artwork, including the original statue of Paul and Virginie, carved in 1881 by Prosper d’Epinay, as well as the famous Post Office stamps – the red “One Penny” red and the blue “Two Pence” – jewels of our heritage.

Port Louis, the flagship city of the Indian Ocean 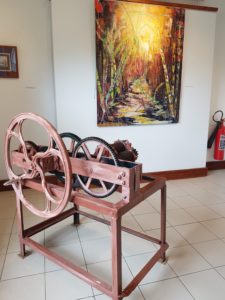 During the centuries following the discovery by the Portuguese of a sea route to Asia and its riches, an island and a city gradually occupy a considerable place in the history of the Indian Ocean: Mauritius and Port-au-Prince.

From a simple place of release for crews in search of fresh food, the island becomes, because of its advantageous geographical position, a position coveted by the Dutch, French and English to serve their expeditions of discovery, conquest and trade on the road to India and China.

Through the various photos and other paintings of the time, the visitor notes that Port-Louis was a very prosperous port city. The number of boats in the harbor testifies to this. One can also relive the many transformations of the capital and appreciate the different cultures that make Mauritius today.

The visit continues in a room that retraces the outline of the history of the post office in Mauritius. The earliest known letters from Mauritius emanate from the Dutch Maluku fleet and date from June 1601. At this remote period of first stopovers in a still unoccupied land, it was customary for the captains of ships to leave mail in sealed jugs that were suspended upside down in the trees of KuipersEyland (Tonneliers Island or Coopers Island), at the entrance to Noord WesterHaven, the present bay of Port Louis.

Under the French occupation, the mail continues to depend on the goodwill of the captains of ships accosting the island. This is the case until 1774, the date of the creation of the first official maritime postal service by Pierre Nicolas Lambert, founder and director of the Post Office at Isle of France in 1772.

In this room, we also learn how the engraving of stamps began in Mauritius. Joseph Osmond Barnard, the engraver of the famous “Post Office”, was born in Portsmouth, England on August 10, 1816. In search of new horizons, he left for France and embarked illegally at Le Havre, in 1838, on the third. Acasta masts, bound for Mauritius. From the Rue Royale where he opened his first shop, he moved to April 1842, rue du Rempart (Edith Cavell Street), more busy, then to the Chaussée. He is at the latter address when the postmaster asks him to engrave the first stamps of the colony, assuring him, without knowing it then, his place in history! 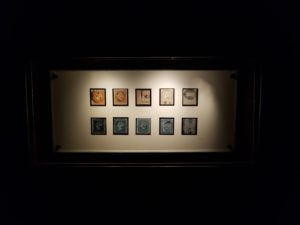 On September 21, 1847, Maurice issued two postage stamps, the Post Office. Only 500 One-Penny Red-Orange and 500 Two Pence Dark Blue Stamps will be produced. First stamps of the British Empire, to be issued out of Britain, they are of rare and legendary value Blue Pennies.

Today, only 15 One Penny and 12 Two Penny are thought to have survived. Most of them are in the permanent collections of museums. In 1993, a set of two non-canceled stamps were purchased by a consortium of 16 Mauritian companies led by the MCB. They have since been exhibited at the Blue Penny Museum.

“Mauritians have built a collective unconscious where facts are hidden and others, on the contrary, transformed or unreal. For example, the museum is called the Blue Penny, but the ‘penny’ is the red stamp, not the blue. The ‘blue penny’ does not exist! It is a Mauritian building “, comments the curator of the museum. “I do not want to change the name of the museum, but this error is a great illustration of our identity, the Mauritian identity,” he continues.

This famous novel by Bernardin de Saint-Pierre has forever associated Mauritius with the mythical story of these two lovers, which remains one of the most beautiful works of world literature. This room presents various illustrated editions of the novel as well as several paintings inspired by the same work. It also makes it possible to distinguish between legend and reality since it also tells the real story of the sinking of the Saint-Géran which Bernardin de Saint-Pierre was inspired by the tragic end of his novel.

The eyes of discovery

In this room, the visitor immerses himself in the world of great navigators. We learn more about the origin of mapping and browsers.

Although the Arabs, Indians, Malays and Chinese traveled the Indian Ocean long before the Portuguese, they left no map attesting to the existence of the Mascarene Islands: Mauritius, Reunion and Rodrigues. The earliest maps, in which these islands figure, are of Portuguese origin Pennyse.

“On these maps we see four Mascarene Islands, while there are only three. We also note the presence of islands that do not exist and, above all, a deformation of Madagascar. For a long time, they perceive it facing East. It is only much later that they discover that Madagascar rises straight to the North. The cartographers reported the mistakes of each other. It is only in 1850 that we will have an exact map, when everything was discovered in the Indian Ocean “, explains Emmanuel Richon.

The museum also pays tribute to Lislet Geoffroy, who left us a magnificent map of Mauritius and Reunion Island. This map is all the more important because it has lived in both islands. Indeed, he was born on the island Bourbon (Réunion) and lived his last days on the Isle de France (Mauritius). Thus, he knew the two successive colonizations of Mauritius: French and English.

We continue to the second room of the museum. This retraces the outline of the colonial history of the island. Around various prints, maps and ancient objects, the visitor can fly over the three major periods of occupation, especially the pivotal stages of taking possession of the island, the arrival of the first Dutch in 1598, through the French colonization in 1715 taken by the British in 1810.Blue Penny

Emmanuel Richon shows us the documents of the Battle of the Grand-Port and the English period, among other portraits and French and Dutch documents. “We see that the French came to Port-Louis harbor during the English period. Thus, there has always been a francophone dimension that remains on the island. This is the principle of the Mauritian culture: when we arrive, we must accept all the layers of history and culture that precede. We can try to add our layer, provided we accept all that already exist! ” 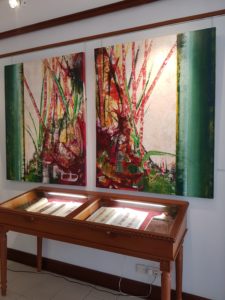 In addition, the different paintings draw us life on the island during each period and plunges us back into the vestiges of the past, including extinct endemic species. “There were no natives on the island. On the other hand, there was the largest turtle that the land never carried and that, unfortunately, the Mauritians do not know in general. She was so tall that in her back shell, 10 people could sit and picnic. So, it was a gigantic turtle that no longer exists in our collective unconscious, just like the Indian Ocean which is limited to Mascarenes for most Mauritians, “explains my guide.

We are also briefed  about the dugong, a marine mammal of the Sirenian order, who lived in our waters. Like the dodo, it has disappeared from our island. However, the dodo, he, is the subject of many stories and legends, often unfounded. The curator of the museum explains to us that, without predators, the dodo was the king of the island before the arrival of other exotic species, brought by the builders of the island. Our missing emblematic dodo was called “foul-smelling bird and was not good to eat”. So, they were not all eaten by the Dutch, as some people claim …

Not to be missed: The marble statue by Prosper d’Epinay: This magnificent sculpture is a masterpiece of the classicism of the nineteenth century. It represents the passage where Paul helps Virginia to cross the torrent, while they were lost in the forest. This extraordinary statue fills majestically the route in the museum.