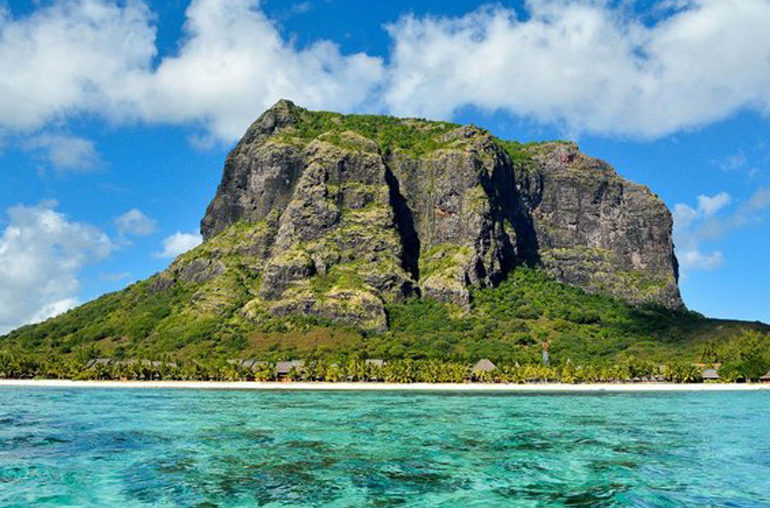 The first tip we can give you is to choose your accommodation in regards to amenities, attractions and beaches nearby. Whether you chose hotel or villa rental in Mauritius, Grand Baie is one of the best places to stay in Mauritius. But why is this small fisherman village of the north so special?

Well, what once was a fisherman village has changed a lot. Nowadays, large hotel chains have settled here. The same goes for luxurious villas in Grand Baie because this village has the largest bay of the island and coincides beautifully with the presence of white sand beaches. Add to it the northern group of islands and a plethora of inland and aquatic activities, you have here the largest beach resort of the Indian Ocean.

It is no secret, Grand Baie owes its success to its beaches. They brought a lot of development, but held in reserve the same old charm. You’ll see this every afternoon, hundreds of fishermen and tour operators mooring their boats in the bay. Mauritius has a sumptuous landscape, Grand Baie is a real example.

All activities are possible, think about Big game fishing, scuba-diving, water-ski, snorkelling, parasailing, sky-dives and even undersea walks, nothing’s missing. Come and enjoy the beaches of fine sand, the generous sun, water sports and also golf, tennis, hiking, hot and frenzied evenings, its many shops, ideal for shopping, tasty beach restaurants. It is the ideal destination for honeymooners, family and friend holidays alike.

For Grand Baie and Mauritius in general, it is recommended to drop here during the months of May to November, when temperatures are then suitable and the rainfall is rare. Yes, sunshine for winter! There always something exhilarating to do in Grand Baie.

Everybody visits Mauritius for its beaches, at least that’s what you’ll see in most travel magazines and booking websites. However, since the start of our blog, we have been recommending travellers to visit the capital city of Mauritius; Port Louis. It is nothing like Rome, Paris or London but far from touristic centres, Port Louis promises a discovery of real Mauritian life. You know, the small things like buying handcrafted clothes or discovering the sound of a new local instrument, these moments are also to be cherished. As you stroll through the streets of Port Louis, the city reveals the history and culture of Mauritius like an open-air museum.

The best places to see in Port Louis:

You need at least one day to get a sense of this beautiful city. A great place to start your city trip is at Le Caudan & Port Louis Waterfront. First, if you choose to rent a car in Mauritius, you’ll find a secured parking here. Cross the beautiful bridge and you’ll be right there, in the oldest shopping mall of Mauritius. Le Caudan Waterfront opened its gates in 1996 and was recently renovated for a more modish, modern look and better amenities as well. The well-known umbrella alley calls for souvenir photos and talking about souvenirs, don’t miss the Craft Market, located in the southern part of the mall. With hundreds of shops, restaurants, bars, pubs, a casino, local retro street food and entertainment, you can easily spend a full day on the Waterfront. But, let’s move on, we’ve got a city to discover.

Use the northern underpass of Le Caudan and you’ll find yourself on the road to the central market of Port Louis: the liveliest place of the capital after le Champ de Mars. You will find a multitude of kiosks of colourful fruits and vegetables, exotic sea fruits and some of the most consumed Mauritian street food. You’ll also find a lot of souvenirs, local handcrafts and (counterfeit) clothing. These cost really cheap, but beware some vendors try to fool tourists.

Very few know that Port Louis is home to a World Heritage Site by UNESCO: the museum of Aapeavasi Ghat, located two hundred metres from Le Caudan. It is a former immigration depot that hosted between 1849 and 1923 immigrant workers from India. It is an open-air museum, installed on the quays opposite the bus station of Port Louis. Again here, there is no entrance fee.

Fort Adelaide or more commonly known as La Citadel is your next stop in Port Louis. It is a long walk though, we recommend you take the car or pick up a taxi at La Place d’Armes. This bastion was erected by British settlers in 1834. Dominating the city, it was at the time a bulwark and a means of defence against enemies (at the time; French colonizers). We can also see several artilleries that testify to this time. The Citadel is more than 100 meters high and you can enjoy a panoramic view of Port Louis and the surrounding mountains. The site was recently renovated especially for tourists, with several souvenir shops.

A sacred lake for the Hindu people of Mauritius, Grand Bassin also known as Ganga Talao is the culmination of a long pilgrimage for many believers every year. This place, known since colonial times, is also of great beauty. Grand Bassin is composed of a natural lake (formed by an old crater filled with water) bordered by lush greeneries.

Despite its religious character, Grand Bassin is a place much appreciated by Mauritians of all faiths. Some non-Hindus sometimes even participate in the annual pilgrimage. Many tourists also go there. The temple pundits are always happy to tell the story of the sacred lake to anyone who wants to hear it.

Ganga Talao is also known for its funny monkey population, do bring a banana or some food if you want to get close to them. Half a day is enough to visit Grand Bassin and there’s no entrance fee!

If you are a nature lover, do not miss to go for a “walk” (or should we say “marathon”) in the gigantic National Park of Black River Gorges. Located in the south eastern part of the island, this place is the best representation of what Mauritius looked like three hundred years back.

Hiking enthusiast will surely spend more than the half day pigeonhole picnicking hotel excursions. This is the place to see if you want to explore the hidden facet of Mauritius. You’ll enjoy amazing hikes where the deeper you the greener the forest becomes. Be ready to discover shimmering waterfalls, landscapes, rare animals and exotic fruits. This forest has the particularity of sheltering more than 300 species of endemic plants and 9 species of endemic birds of Mauritius.

For a guided tour, count half a day, from 9h to 13h approximately, with picnic included at the end of the course. There are several hiking levels and lengths. We recommend you book a guide at the entrance if you want to explore the park to its deepest.

With a total area of 6750 hectares, the Black River Gorges National Park is the largest natural park of the island. Several passages are possible. We recommend the one of 10 km, the Macchabée hike, which will take you approximately 3 to 4 hours return, according to the number of breaks. You will reach the Piton de la Rivière Noire, at an altitude of 828 meters high, the highest point of the island. The panorama is breath-taking!

Le Morne is a Peninsula located on the south-west tip of the island. This fisherman village is home to a UNESCO World Heritage Site since 2008, Le Morne Brabant and what many consider to be the most beautiful beach of Mauritius; Le Morne Beach: wilder than the very tourist beaches of the north and the west, it invites for calm and relaxation.

This beach is famed for its cleanliness and pure white sand, but others like it for its windy conditions. Numerous wind sports such as surfing, kayaking, water-ski and windsurfing are practicable here nearly all year round. But if you are not after the tropical adrenaline rush, just bring your sunscreen and towels, that all you need to enjoy this magnificent beach.

If you have the chance, you should visit and halt at the rock of Macondé, a huge rock elevated from the sea. It’s coastal was recognised as one of the most beautiful roads in the world will leave you breathless. On a clear day and in the dark, it seems that we can even see the lights of the island of Reunion on the horizon.

The second big attraction of the villages is Le Morne Brabant; a basaltic monolith that forms one of the highest mountains in Mauritius (555 meters above sea level). Surrounded by a beautiful lagoon, this natural area is a major tourist attraction, as well as a refuge for endemic plants. Get up there, no entrance fees again.

Located in the lagoon of Trou-d’eau-Douce off the east coast of Mauritius, Ile aux Cerfs is one of the most popular tours of Mauritius. It is as popular with foreigners and Mauritians alike. Everyone takes advantage of its dream beaches and extraordinary landscapes to relax at the weekend. The uninhabited island is mostly covered with exuberant vegetation and surrounded by sumptuous beaches.

However, the wharf section is very touristy and there will be systematically many people enjoying the beaches in the immediate vicinity. If you want more privacy, walk a few minutes and you will find a deserted beach to relax in peace.

To avoid the crowds, go early in the morning and avoid weekends. For your comfort, do not forget sunscreen because even if you find a little shade under filaos, the sun shines very hard. Finally, if you want to admire the seabed, get yourself a mask and a snorkel but also shoes because of the sea urchins potentially present.

The west coast of Mauritius is pleasantly contrasted and above all, it offers the privilege of being the least watered coast. Flic en Flac and Tamarin know only a few rainy days from May to November, and 10 at most in February: the region is therefore to choose by those who do not want to lose a crumb of their time spent in the sun. Turquoise sea and white sand are of course present, with a large part where you can sit in the shade

Visited by Mauritians and tourists alike, it reveals its 8 kilometres of white sand to visitors eager to discover a preserved beach. The old fishing village has become, with the rise of tourism, one of the hotspots of relaxation and water sports.

Flic-en-Flac exposes an authentic and relatively uncrowded beach where you instantly feel connected to the ocean. Fishing still plays an important role in the local economy and big game fishing trips with local fishermen are regularly organized. In short, the beach of Flic-en-Flac represents a perfect stage to combine the authentic discovery of the Mauritian coastline with nautical activities.

When the sea is calm, the water is transparent and you can, with a snorkel and a mask, see many multi-coloured fish. Several dive centres also offer one-day sessions for scuba diving. If you want to have fun in the evening, you will find various restaurants and night-clubs in front of the beach.

We hope you had fun visiting Mauritius. Don’t forget to send us some of your travel photos.